Home » Larb vs Nam Tok - What's the difference between these Thai & Lao dishes?

Are you wondering what the difference is between Laos Larb vs Nam Tok? In this post, we compare the ingredients, the preparation, and nutritional comparison between these two authentic Lao meat dishes.

Larb and Nam Tok are popular meat salads in Thailand and Laos. They are both flavorful, spicy meat salads that originate from Laos. Both larb and nam tok are generally made with meat and served with sticky rice and a plate full of fresh herbs and vegetables like baby eggplant, cucumber, and culantro leaves.

The Difference Between Laos Larb and Nam Tok

Larb and Nam Tok are delicious zesty, warm salads that are mixed with toasted rice powder, fish sauce, lemon juice, and a mixture of mint leaves and scallions. However, the dishes have slightly subtle differences namely in terms of the protein.

Main Comparison Between These Two Popular Meat Dishes from Laos

Larb and nam tok are different because larb uses minced meat whereas nam tok larb uses sliced meat with the salad mixture. Nam tok uses sliced grilled beef with the rendered juices used within the salad itself, which is where the name "nam tok" originates from, referring to waterfall of juices.

Larb is a warm salad that is generally made using cooked chicken, duck, pork, and fish which is then minced and mixed with a variety of sauces and fresh vegetables. Larb Gai is a popular chicken larb recipe that is often served at Thai restaurants. 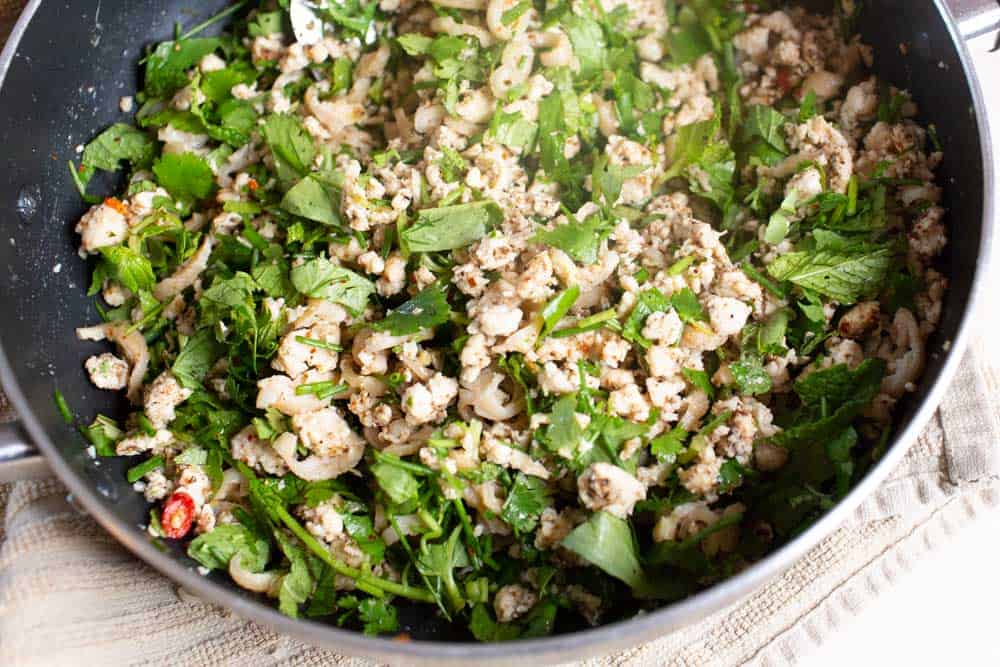 Nam tok is a warm meat salad that is made using sliced medium-rare beef steak that is sliced and then mixed with the rendered juices from the sliced beef along with shallots, fish sauce, toasted rice powder, mint leaves, and juiced lime. 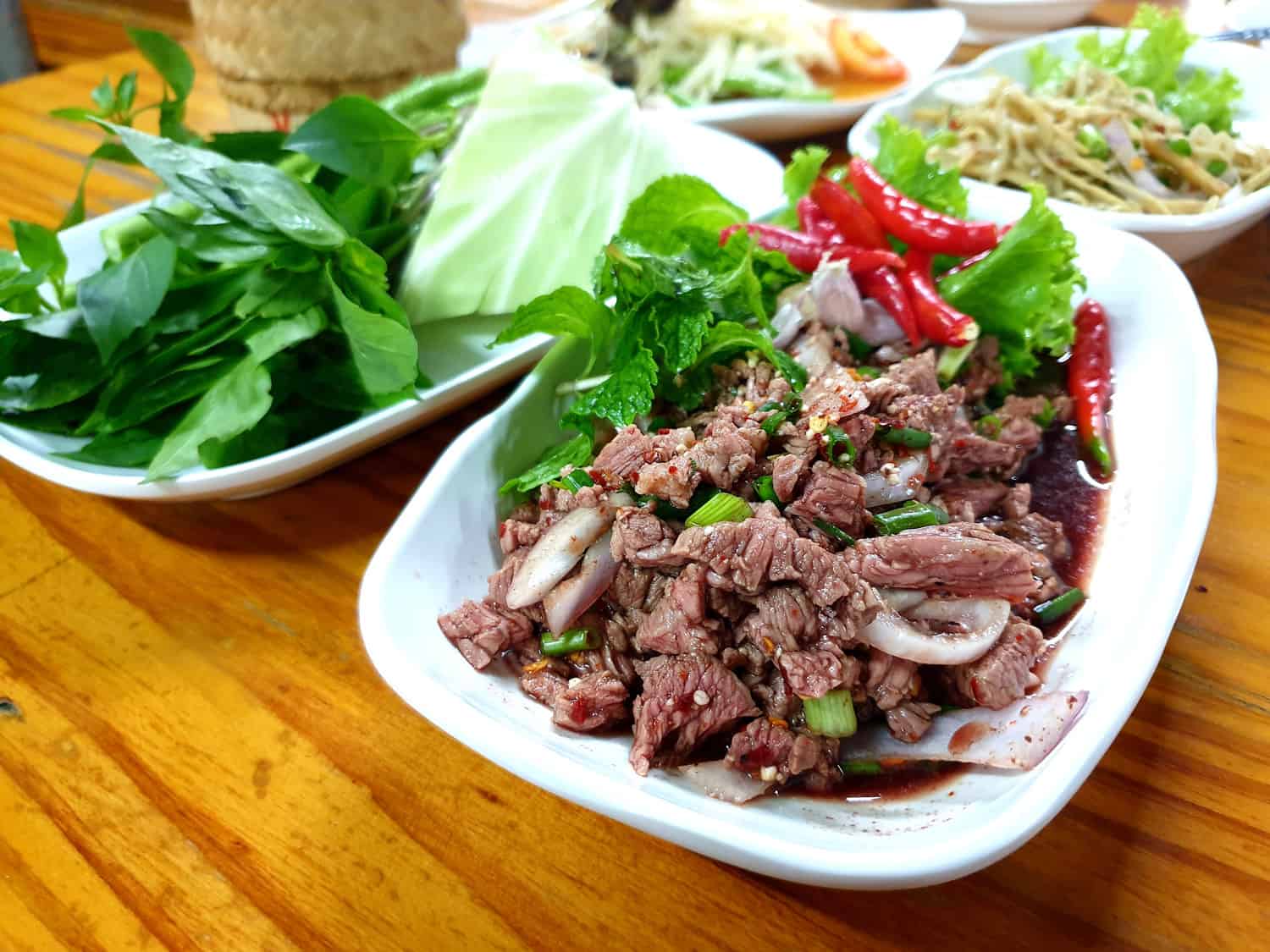 Origins of Larb and Nam Tok

Both of these are signature dishes from both Laos and Thailand. However, Laos has the claim on the origins of both larb and nam tok.

Authentic larb is full of contrasting flavors and has been adopted in a lot of different Thai restaurants in the western world. It is known both as Thai Larb and Lao Larb. Both regional variations are the same, which includes being a minced meat salad that has authentic flavors due to the use of mint, lime, and the all important toasted rice powder.

Laos Larb is can also be found spelled the following ways due to the translations from Thai/Lao to English:

In Thai and Lao, Nam Tok translates to waterfall which refers to the juices that run out of the meat when grilled or sliced. Nam Tok also is often referred to as a soup as well. So when ordering or looking for recipes for Nam Tok, just make sure you are looking for Larb Nam Tok.

Ingredients of Larb and Nam Tok

The most important ingredient in both larb and nam tok is khao khua, which is toasted sticky rice powder. This ingredient can be easily made at home (which might cause your house to stink up), or you can purchase it premade at the Asian grocery store. It allows the juice from the meat to thicken (kind of like corn starch) and bind all of the ingredients, giving every bite another level of texture and flavor.

One ingredient that is also used in authentic larb and nam tok recipes is padaek, which is unfiltered fish sauce. Generally, filtered fish sauce can be used instead if you don't really want to look at the chunky fermented fish in the bottle or can't handle the smell.

Comparing How Nam Tok and Larb Are Served

Both Nam Tok and Larb are served with a basket of sticky rice and a plate of fresh herbs to eat between bites. Generally, a small ball of sticky rice is rolled into your clean hands, and a scoop of nam tok or larb is placed between your index finger and thumb to eat it. Between your next bite, you grab a fresh herb like small eggplant to eat.

You can also serve it alongside with Som Pak Papaya Salad, which is a delicious green papaya salad that infuses sour, sweet, and salty flavors. 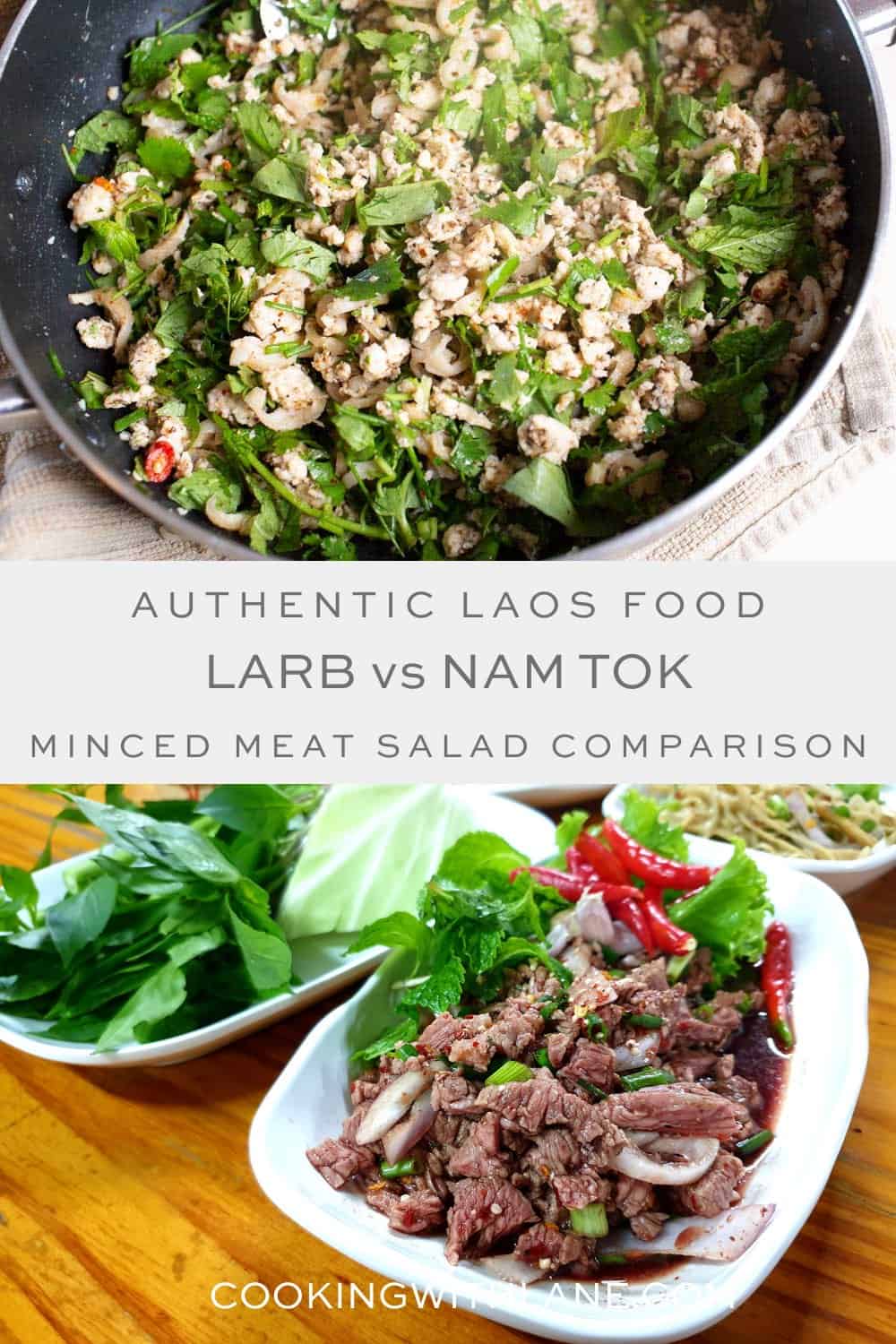 Other Variations of Larb and Nam Tok

Another version of larb includes using sour pork and pork skin called larb som moo. This is used by pickling pork over a couple of days and then mixing it with same ingredients like khao khua, mint, lime, and the usual larb ingredients.

There are quite a bit of variations of larb and nam tok recipes in both Thailand and Laos. Laos does have variations that might make some westerners queasy (and even sick). Larb Dip (meaning raw minced meat salad) and Larb Luat (meaning blood minced meat salad) are two dishes that will probably never make mainstream here in the states or in any regulated restaurant. That's because both of these dishes are served with raw meat and  sometimes even bile. It's uncooked meat that also with a lot of risk from ingesting raw meat.

This is a salad dish that is found in the northern part of Thailand that doesn't use fish sauce or lime juice, but includes star anise, cinnamon, ash seeds, cumin, and cloves along with raw meat.

How do you pronounce larb?

Larb is pronounced lahb with a short letter A sound.

How do you pronounce nam tok?

What is larb luat?

Larb luat generally uses raw meat along with blood and bile within the meat salad.

What is larb dip?

Larb dip generally uses raw meat that is pounded into a meat salad along with the usual larb ingredients.

Both larb and nam tok are heavy protein salads that provide a freshness and spice in a single bite. The flavors of both dishes make for a full meal when combined with sticky rice. Whether you loved the small bites of warm, minced meat with the bold flavors of larb, or the juicy sliced steak melded with the freshness of the mint and scallions, both larb and nam tok are sibling cuisines from Laos that you can fortunately find at your local Thai restaurant and you can also make them right at home using the recipes below!