Bun Rieu is a comforting Vietnamese rice noodle soup that has a pork broth base that is topped with a crab and pork that is layered with fresh herbs and vegetables. This recipe is the easiest and most simple way to make bun rieu, which will allow you not to be at the stove all day.

Of all the dishes in my repertoire, Bun Rieu is one of the top Vietnamese soups I get asked to share my recipe about the most. If you have tried Pho and Bun Bo Hue, Bun Rieu should be the next noodle soup on your list of Vietnamese dishes to try.

In my recipe that I'm sharing below, I am taking this dish up a level by adding shrimp and leaving out the shrimp paste, which most westerners turn their nose up at. If you love seafood, this soup is amazing and does not ever disappoint.

This will still be an amazingly hearty and delicious recipe, but without all of the fuss and hours of simmering required for most Vietnamese broth based soup dishes. Making Bun Rieu doesn't have to be complicated to cook. You'll find yourself with a delicious bowl of this tangy dish in no time.

This dish from Vietnam is well known around the world. It is especially great during cold winter days because the pork and crab mixture just melts in your mouth.

Today, I'm going to share with you a simple and quick version of this dish so you can make right at home.

I get a lot of questions about what this dish is made of, what it is, and other random questions, so I just want to knock those out first.

Bun Rieu is a Vietnamese noodle soup made with crab meat, pork, and tomatoes. An authentic Vietnamese Bun Rieu recipe infuses pork bone broth, crab spices, and tomatoes. Crab is mixed with ground pork into small balls that are then added to the soup to cook, and then ladled into a serving bowl with vermicelli rice. The soup is then layered with fresh herbs and vegetables.

Other Names for Vietnamese Pork and Crab Noodle Soup

Bun Rieu is also known with the following names:

What does Bun Rieu mean?

There are several variations of Bun Rieu which is mainly due to the protein that is used. They are:

Bun Rieu is a delicious Vietnamese soup with chewy vermicelli noodles drenched in a tangy broth with stewed tomatoes with slightly sweet undertones with the soft, pillowy crab and pork clusters that are then topped with fresh herbs.

Bun Rieu when served traditionally is not spicy. However, like most Vietnamese dishes, sauces, seasonings, and condiments are often added after served to provide a more personal flavor palette. Often, chilli oil is added to Bun Rieu to add a more spicy profile.

The crab and pork meatballs that make up an authentic bowl of Vietnamese bun rieu is made with by pounding baby crabs in a mortar and pestle that are then strained and sieved into mashed up paddy crabs.

While freshly pounded crab showcases the freshness of the bowl, all of this effort can be avoided by buying cans of minced crab or prawns easily at your local Asian grocer for this recipe.

What type of crab meat should I use for Bun Rieu?

For authentic Bun Rieu, paddy crabs are used to make this dish. Second best crab to use would be fresh Alaskan King crab. Third best crab to use are canned crabs. I'll share the brand below that I highly recommend.

The meatball mixture for Bun Rieu uses ground pork, crab meat, and some seasonings that are then added directly into the soup.

Other variations include substituting the ground pork with turkey or chicken. Ground shrimp can also be added to the meatball mixture.

Why is Bun Rieu orange and red?

Bun Rieu gets its signature orange and red color due to the crab mixture with the tomato stew.

Below are the ingredients that you'll want to source from your local Asian grocer for these dishes. They should be relatively easy to find.

These are the two cans of crab and shrimp paste that I highly recommend using for this recipe. They are already jarred and canned.

In authentic recipes, you'll need to use a mortar and pestle to pound the crabs into pulp to get that signature flavor of Bun Rieu. This is the next best thing to getting fresh crab. This brand is generally more expensive than the others, but you'll definitely get what you pay for. 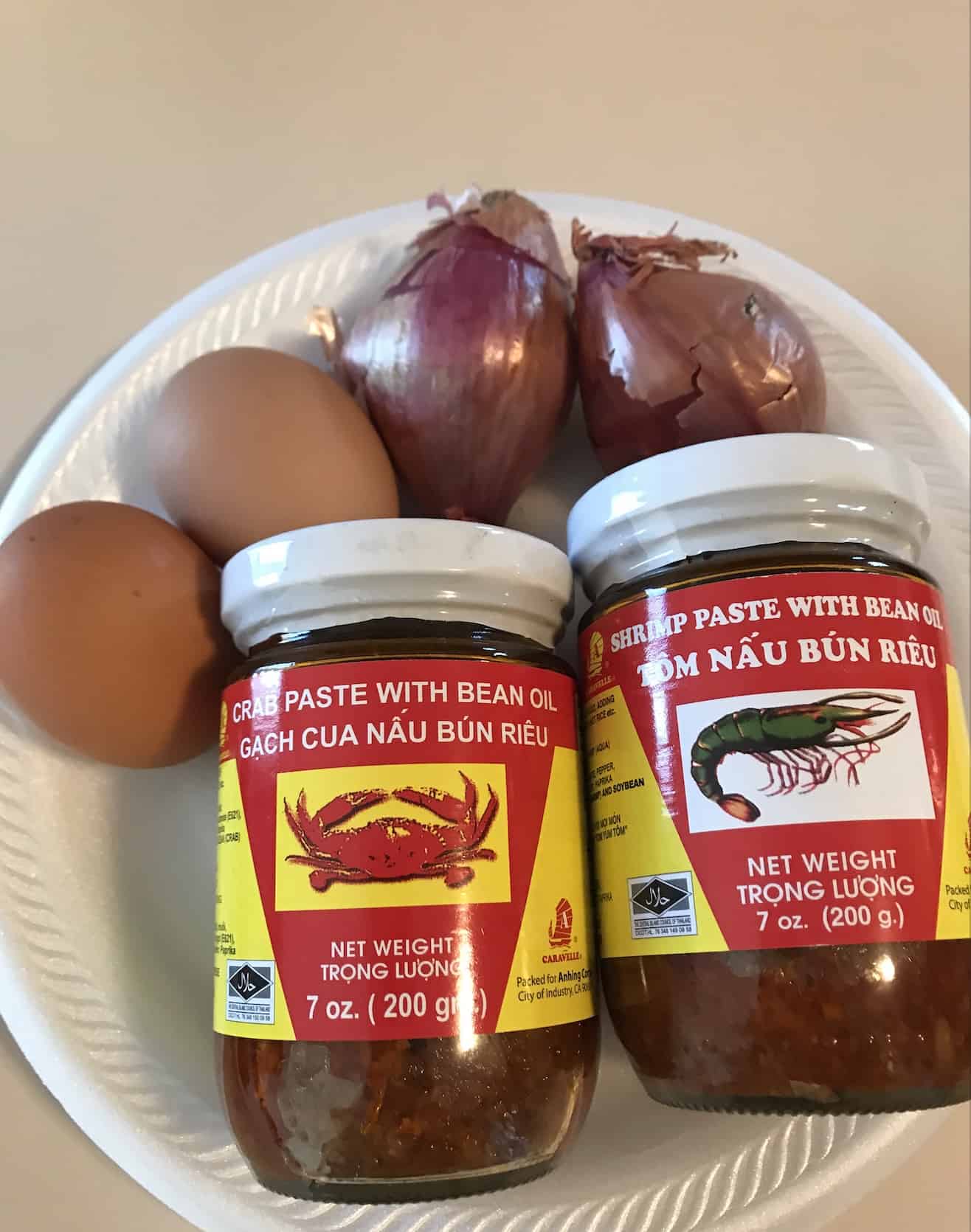 Asian bean sprouts can be found really inexpensively at an Asian grocer. You can learn how to sprout your own mung beans.

This saw-edge leaved herb is bright green and has a lemony scent.

Perilla looks similar to kinh gioi, bu it has larger leaves and has a distinct purple color.

This has a crunchy texture due to it's stem that is thick on the outside, but hollow on the inside. It is a favorite in Vietnamese dishes. This little nifty tool will allow you to split the stems so that the rau muong can be edible.

Generally, Vietnamese soups require hours of simmering In my recipe, it takes under an hour, but will still bring out the flavors.

Use Chicken Broth for the Broth Foundation

One of the standouts of Bun Rieu is the flavor of the broth.  Authentic versions of this recipe uses pork neck bones that are parboiled and then rinsed to bring out an extra layer of flavor to the broth. I don't find that this additional step is necessary to still make a delicious dish of Bun Rieu.

Canned chicken broth is just fine! If you really wanted to go the route of pork bone broth, you can use pork riblets to make the broth. Again, the epitome of Vietnamese soups is a clear broth, just make sure you clean the riblets thoroughly before adding it to the final soup.

I wanted to share with you the various ways you can make bun rieu broth. There are so many ways to achieve the flavor, I just wanted you to be aware that there are definitely shortcuts to still make this recipe undeniably delicious.

Optional Ingredients to Use with Bun Rieu

In the most authentic version of this recipe, fermented fish and shrimp paste is used to provide the umami flavor inside this soup. It is definitely pungent, so if you wanted to substitute this, you could totally use fish sauce as a replacement (use the Squid brand).

You can add ketchup to Bun Rieu to add a layer of saltiness, vinegar and coloration to this soup. It's not authentic, but provides a level of flavor that is delicious.

While I didn't have any on hand for this recipe, you can always top Vietnamese cha lua with this dish if you wanted another layer of protein.

Some recipes call for this as well, but I like to omit congealed pork blood for this specific recipe. Thisi s a poor man's barbeque that has a spongy, juicy meatloaf and sausage taste.

Bun Rieu can be refrigerated for up to 2 days. You should not freeze any remaining broth, as it will not keep well.

Bun Rieu has fresh ingredients and is low in calories.

Yes, traditional recipes of bun rieu are gluten free. Each recipe is unique, so you'll want to review the garnishes to ensure there is no gluten included.

What's the difference between bun rieu and pho?

While both Bun Rieu and Pho are very popular Vietnamese noodle dishes, they have different flavor profiles. Bun Rieu is made with pork broth and is topped with a mixture made with crab, pork, and shrimp over vermicelli noodles. Pho is a noodle dish with beef or chicken broth over rice sticks. Pho has slices of meat added, whereas Bun Rieu key protein ingredient is the crab meat mixture made with minced crab, ground pork, and egg.

What type of noodles should be used for Bun Rieu?

Vermicelli rice noodles are used in Bun Rieu, which are the rice noodles that are long, slim, and cylindrical.

Bun rieu is a popular Vietnamese noodle soup that is characterized by the crab meatballs, crab paste, pork-broth, and tomatoes. It's uniquely savory in that this homestyle soup harmonizes flavors of sweet and salty.

This comforting, delicious and cozy noodle soup is absolutely delightful. Bun Rieu is a flavor packed noodle bowl that our family loves. It's kind of like crab cake, but in a soup. The bold flavor combinations of sweet, svory, sour and hearty makes up the deliciousness of this dish.

Whether you are trying to comfort yourself in cold winter months or feeling like any type of comforting dish, Bun Rieu is a great dish to have year round.

Bun Rieu can be refrigerated for up to 2 days.

As an Amazon Associate and member of other affiliate programs, I earn from qualifying purchases.

If you made this recipe, don't forget to leave a 5 star review! Please share on social with #cookingwithlane or the "I made it" feature button on Pinterest!