Learn the difference between Chinese and Vietnamese egg rolls in this post. While both are from Asia, their egg rolls aren't exactly the same. Find out the differences in ingredients, preparations, and taste differences.

If you have ever been into a Chinese and Vietnamese restaurant, you'll know that there is quite the difference between both region's egg rolls. While both are delicious, rolled appetizers, they are vastly different in the ingredients and how they are compared.

Not to mention, egg rolls are generally fried, there are some versions of spring rolls that are also fried (and some that are served freshly made without frying).

With all of this confusion, it might be hard for you to try to order the right dish so that you get what you want.

In today's post, I'm going to break down the major differences and what you can expect from each region's delicious dish. While all rolls share some sort of ancestry (the actual origins still remain a mystery), rolls have a heavy influence in Southeast Asian cooking.

Clarifying the Confusion Between Egg Rolls and Spring Rolls

Here is a question I often get:

In general, Chinese cuisines that have a fried roll are commonly referred to as fried egg rolls.

When referring to spring rolls in a Vietnamese dish, this could refer to two very different types of rolls:

Often, in order to cater to western culture for the purposes of making it easier to order, the latter that is listed is often also referred to as spring rolls for a version that excludes the meat portion. In Vietnamese cuisine, there are multiple types of rolls and often, many restaurants that cater to the western culture try to make it easier for others to order.

This is a Vietnamese spring roll: 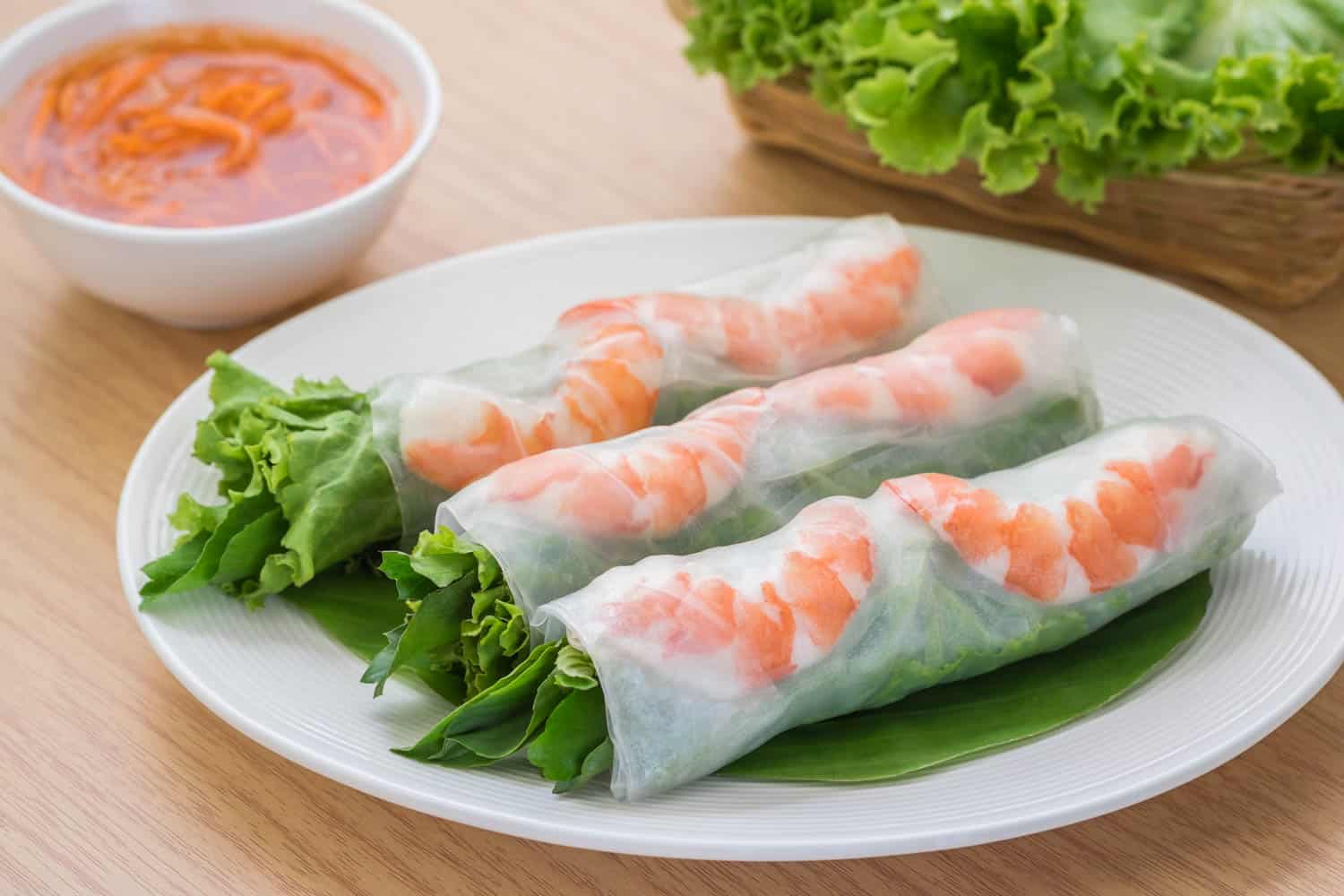 This is a Vietnamese egg roll: 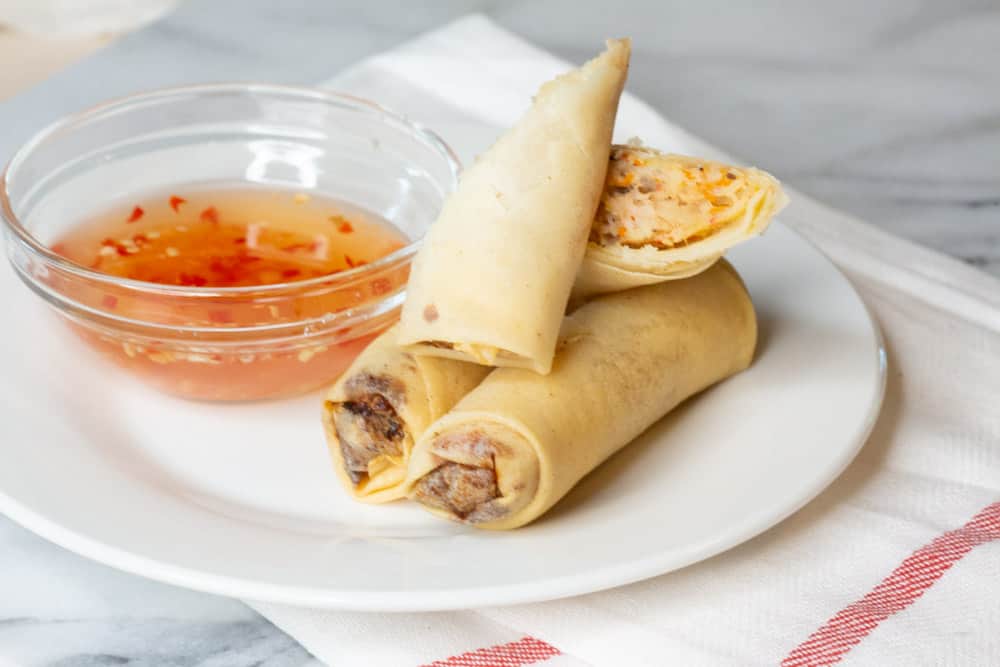 Where did egg rolls originate from?

Egg rolls have a disputed history in terms of the origins. Early literature appeared in 1917 in a Chinese recipe book in the United States, but it does not resemble what we see it as today. This may be the myth behind why the reputation of egg rolls still remains that they originated in China, while history has been indeterminately unclear on the true origins.

Differences in Ingredients Between Vietnamese and Chinese Egg Rolls

Now that we've got the scoop on the differences between egg rolls and spring rolls, let's talk specifically about egg rolls.

What are the differences between the fried egg roll versions of the Vietnamese versus Chinese appetizers?

The differences are both in the wrap as well as in the ingredient fillings. 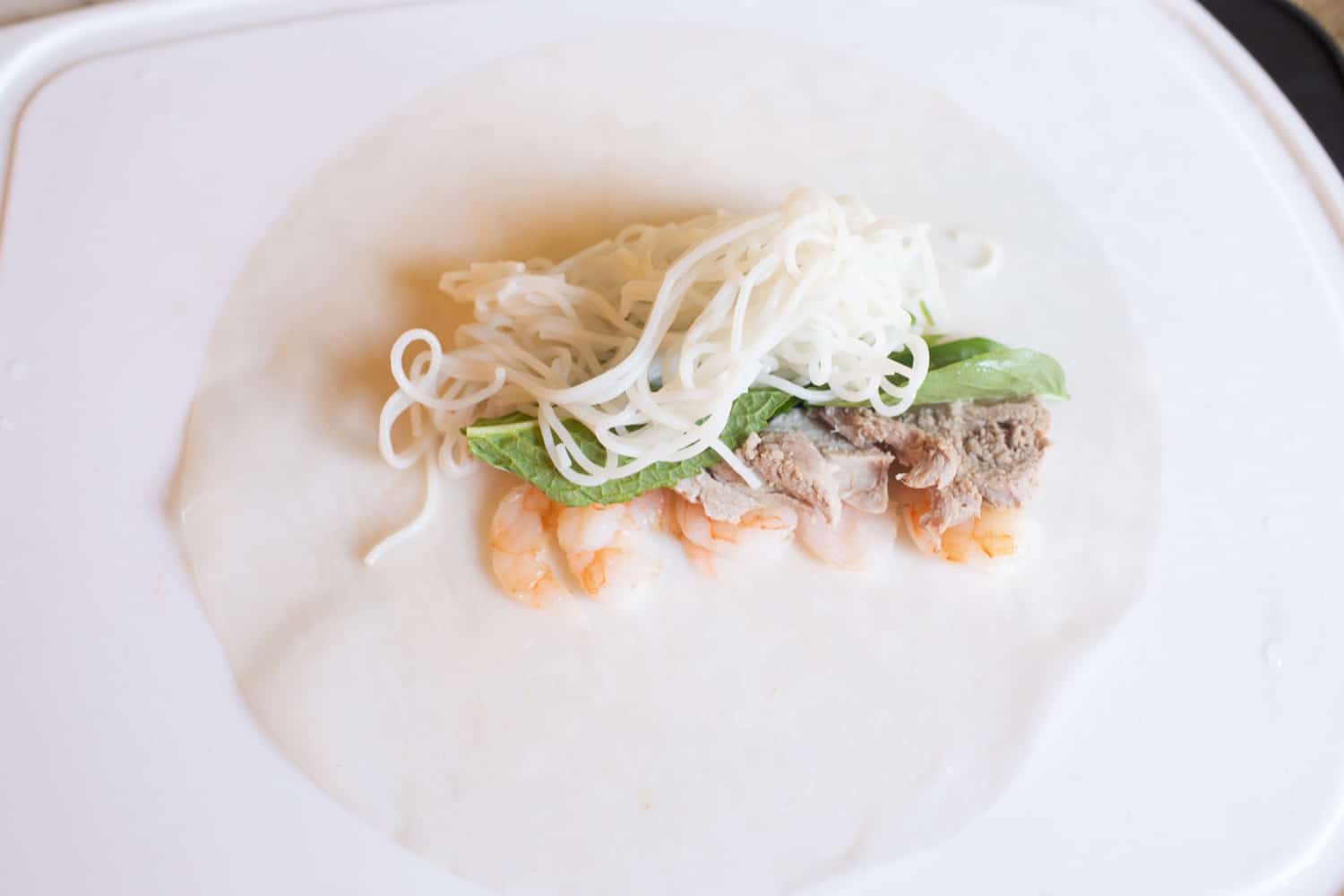 Chinese egg rolls are made with a crispy, wheat based wrapper that slightly bubbles when fried. It is filled with pork, shrimp, bean sprouts, cabbage, and other seasonings. 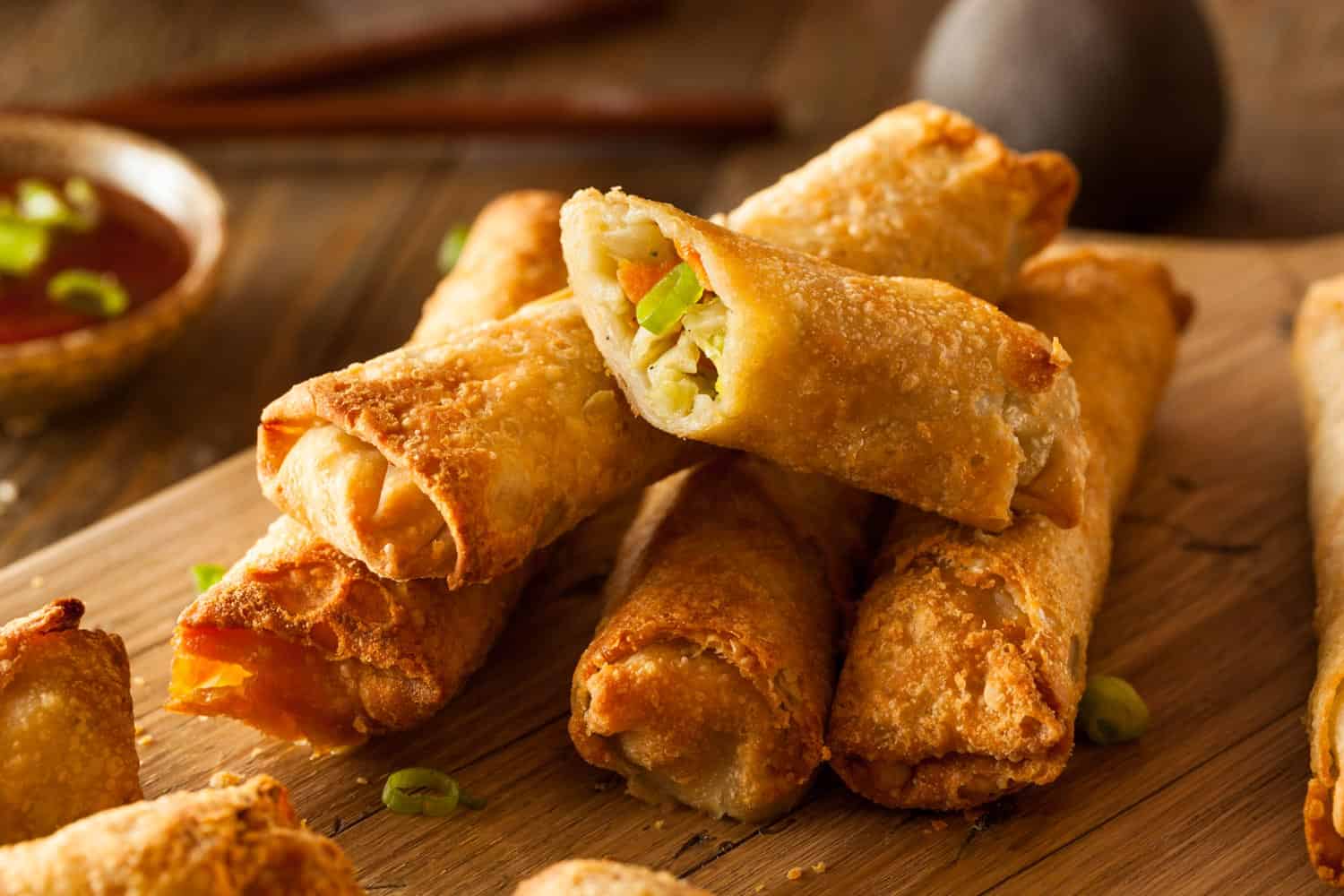 What are the differences between dipping sauces for Vietnamese egg rolls and Chinese egg rolls?

Vietnamese egg rolls are usually dipped in a sauce called nuoc mam, which is a sweet chili fish sauce that is slightly sweet and tangy with a bold flavor of heat. 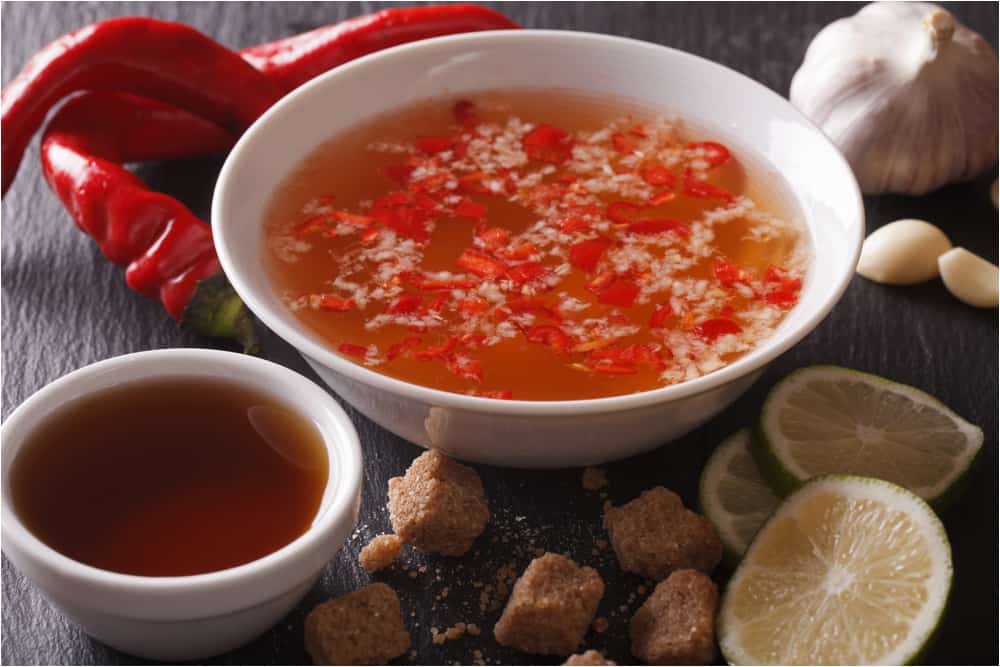 Chinese egg rolls are dipped in a sauced called sweet and sour sauce, which tastes like pineapple juice with the acidity of vinegar with a touch of ketchup. 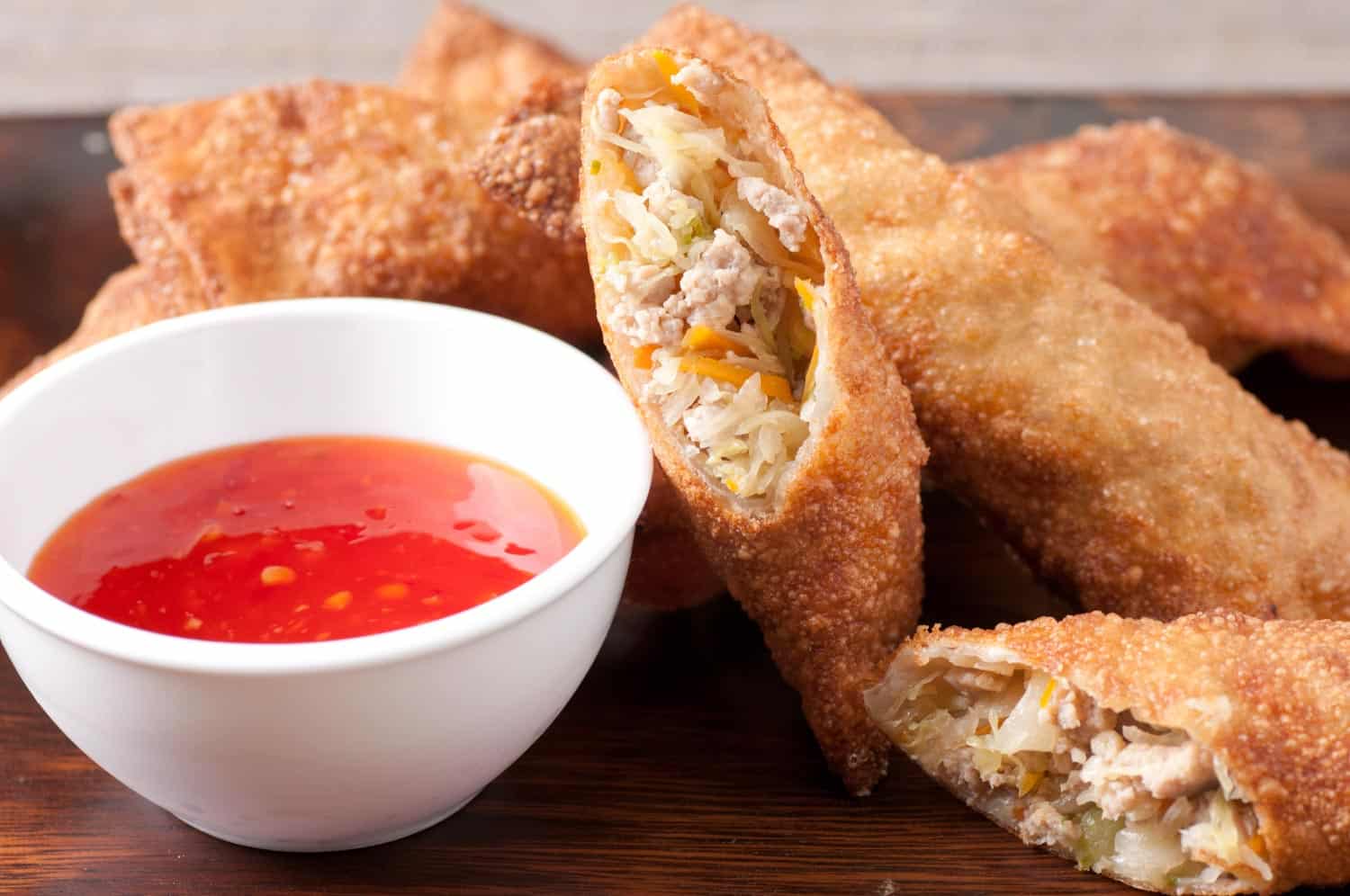 What ingredients do Vietnamese and Chinese spring rolls have in common?

The little similarity they do have is the "meat and vegetables inside of a wrapper." Stretching the commonality comparison, both Vietnamese and Chinese egg rolls share two common ingredients, which is ground pork and seafood.

Do Vietnamese and Chinese egg rolls include egg?

While the name of the dish may imply using eggs, egg rolls do not typically contain egg in the filling nor in the ingredients of the wrapper.

What is Vietnamese spring rolls served with?

Vietnamese egg rolls are often served on a bed of lettuce. It is accompanied by nuoc mam as a dipping sauce. It's often served as an appetizer.

It can also be used as a topping over a plate of vermicelli noodles and grilled meats, which is also drizzled with nuoc mam.

What are Chinese egg rolls served with?

Chinese egg rolls are served also on a bed of lettuce. It is accompanied with sweet and sour sauce. It's often served only as an appetizer.

What are other variations of egg rolls in other regions?

There are a lot of different regions in the eastern world that have their own version of an egg roll.

This depends on that type of flavor you are going for. If you want a hearty egg roll with a thick sauce, Chinese egg rolls may fit your flavor palette. If you are wanting a lighter egg roll, with a strong dipping sauce to kick it up a notch, Vietnamese egg rolls may be up your ally.

I am biased, and I will say that Vietnamese egg rolls are my absolute favorite.

What makes for a bad egg roll?

When egg rolls are served poorly, you'll find that the outer crust is generally very soggy and the filling may be overpowered by a single ingredient. That is for any egg roll made in any region.

I hope that this comparison between two popular regional egg rolls, Chinese and Vietnamese, helps you understand the differences between each of these dishes.

Both appetizers ultimately reign supreme in their countries ability to popularize their appetizers to the mainstream western world. 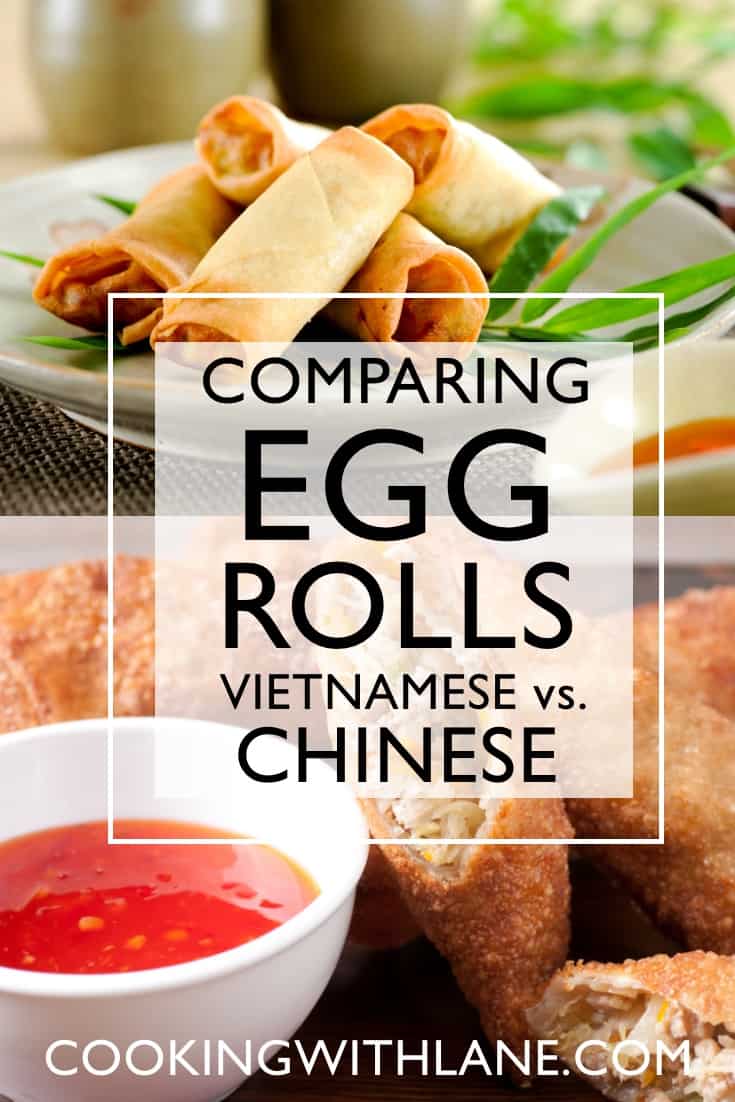