Home » What is the difference between Chinese food and Vietnamese food?

Are you wanting to know the difference between Chinese food and Vietnamese food? In this article, I'm going to share with you the similarities, differences in spices, and talk about the regional differences between these two extraordinary cuisines. 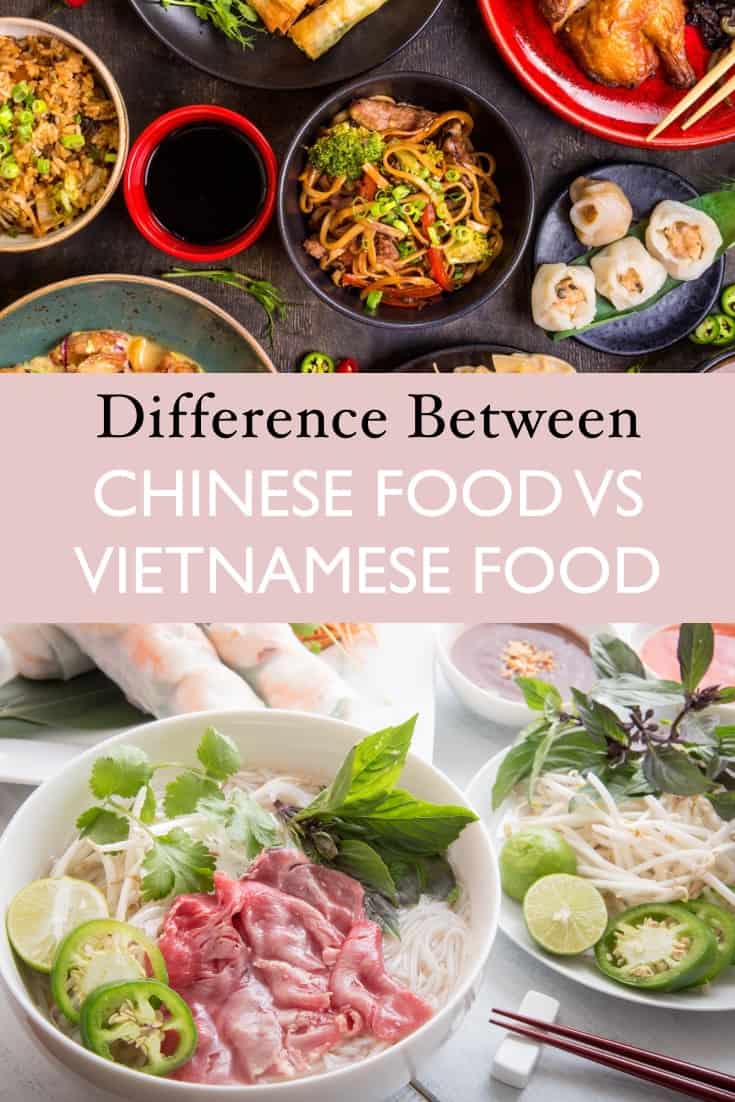 Comparing Flavors and Tastes Between Chinese Food versus Vietnamese Food

What is the main difference between Vietnamese food and Chinese food?

Vietnamese dishes tend to have mild flavors with heavy usage of light fish sauce, whereas Chinese cuisines generally have stronger flavors due to the heavy usage of soy sauce and copious amounts of flavored cooking oils.

Vietnamese food has a fresher taste and often has a hint of mint, cilantro, or lime which provides most dishes a lighter taste. Protein ingredients like chicken, pork, or beef are often cut into thin, narrow strips, but provides enough flavor to not overpower the dish.

Chinese food often has a thick layer of sauce which provides a robust flavoring to the dish. The protein in these dishes are often provided in larger portions as compared to Vietnamese dishes.

How spicy is Vietnamese food compared to Chinese food?

Vietnamese food generally has the spices added after the cuisine is prepared, often provided as an accompaniment to the main dish. Chinese food generally incorporates the spice into the dish, so it varies from dish to dish, with Szechwan regional dishes being the spiciest due to its use of peppercorns.

Differences in Food Origins Between Vietnamese versus Chinese Cuisines 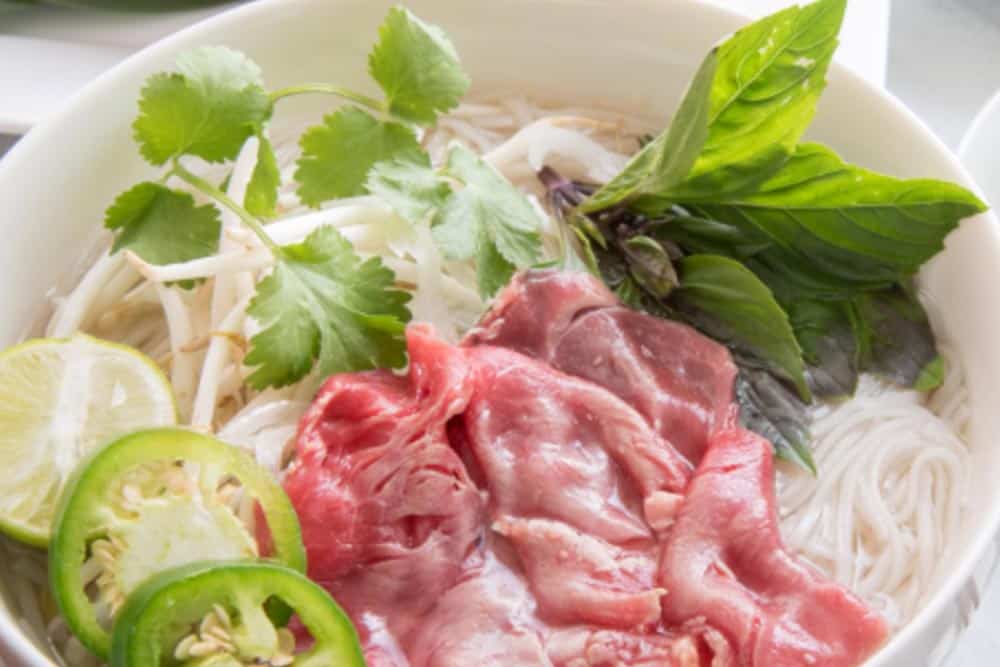 Vietnam is a tropical country, which means that they are in warmer and hotter climates, which is why you may see lots of fresh vegetables cooked in soup. Vietnamese food has both Chinese and French influence. The influence from the Chinese are seen in northern regions of Vietnam. The use of butter, baguettes, coffee, and fresh herbs are influenced from the French, which further pushed the differences from Vietnamese foods from Chinese food.

Northern Vietnamese dishes have saltier flavors whereas southern cities and regions side on the sweeter palate. 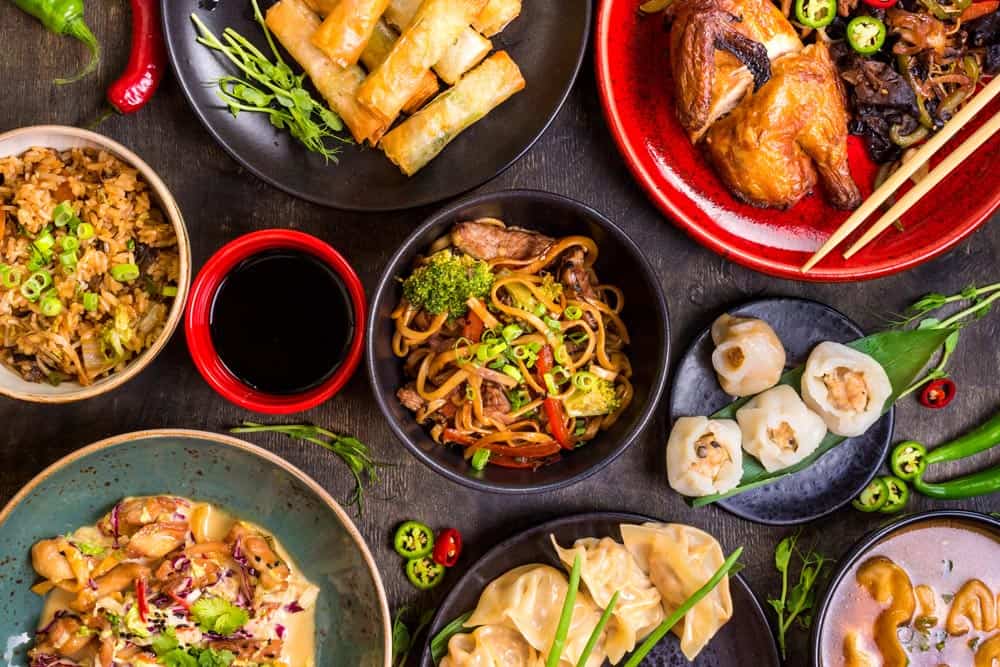 China is a temperate country, which means that they live in cold and mountainous regions and they need calorie-rich foods to keep warm. Most of China has mountains, and these areas typically have colder temperatures which can account for why most cuisines have thicker sauces and meats for surviving in these climates.

Szechwan from the Sichuan Province of China have spicier dishes due to the blending of Sichuan peppercorns, garlic, and chilli peppers.

Chinese cuisine influences other regions and can be found in other areas of the world that includes not just Asia, but also western Europe.

Are there different regional variations?

Yes, for both Chinese and Vietnamese cuisines, there are definitely regional variations.

Vietnamese food is generally considered much healthier than Chinese food due to its use of fresher ingredients, less oil and frying of vegetables, as well as use of lighter sauces.

Chinese food has high levels of sodium, which can generally be tracked to it's heavy use of soy sauce in its cuisines.

Vietnamese dishes that are especially popular include pho (chicken or beef broth with rice noodles), banh mi (sandwich with pork, carrots, and jicama), and spring rolls. Famous dishes for Vietnamese food is pho and banh mi.

Chinese dishes that are favorites in western countries includes sweet and sour pork, kung pao chicken, and fried noodles. Chinese dishes are famous for the the layers of taste, colorful appearance, and delicious aroma.

Similar Foods Between Vietnamese and Chinese

Here are three foods that share similar references and names due to translation, but the ingredients and how they are prepared make each of these specific region's cuisine different than one another.

Chinese egg rolls are generally made of cabbage, carrots, and pork wrapped in a flour wrapper which is then fried.

Vietnamese egg rolls are generally made of carrots, wood ear mushrooms, bean thread noodles and wrapped in a lighter spring roll wrapper which is then fried.

Chinese noodle soups have a deeper and darker broth with a heavier flavor. The noodle is generally made on-demand for the dish.

Vietnamese noodle soups often have a thinner, clear bone broth. Vermicelli or flat noodles often accompany the broth which is then garnished with lots of fresh herbs.

Vietnamese vermicelli rolls generally include wood ear mushrooms and ground pork, but is then dipped with a sweet garlic fish sauce.

How are Chinese and Vietnamese foods similar to other Asian dishes?

Asian food like Vietnamese, Thai, Lao, Korean, Chinese, Japanese share similarities due to their common ingredients and flavors like soup noodles, non-use of dairy, fresh ginger, and heavy use of herbs and vegetables.

Which cuisine uses chopsticks the most?

Does Chinese food and Vietnamese food use MSG?

MSG stands for monosodium glutamate and is used as an artificial flavor enhancer to a lot of different Asian cuisines. Both Vietnamese foods and Chinese foods use MSG.

There is a lot of controversy surrounding the use of MSG because of claims that it causes chest pain, nausea, headaches, heart palpitations, brain damage, and sweating. However, official sources like the Food and Drug Administration (FDA) claim that MSG is safe. Evidence indicate that MSG is safe in moderate amounts.

Here are my favorite dishes for first timers with Vietnamese restaurants:

Here are my favorite dishes for first timers with Chinese restaurants:

I hope this comparison between Vietnamese food and Chinese food allows you to see the differences in the types of cuisines, popular dishes from both, and the culinary differences between these regional plates.

What gets your vote? Do you love both type of dishes?

Learn more about the difference between Vietnamese versus Chinese egg rolls. 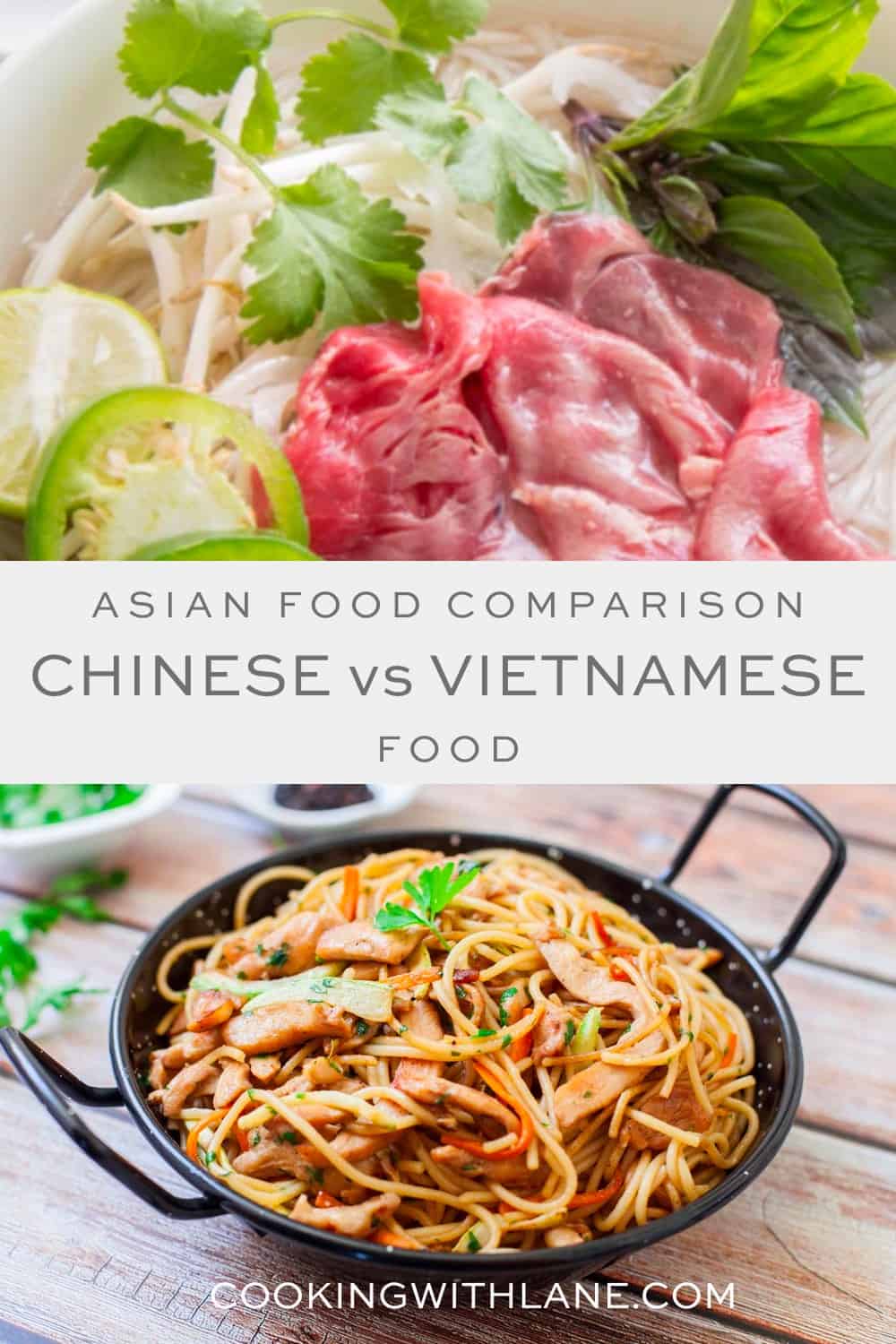