Are you wondering what the difference is between Bun Cha vs Bun Thit Nuong ? In this post, we compare the ingredients, the preparation, and nutritional comparison between these two authentic Vietnamese noodle dishes.

Vietnamese cuisine is reknowned for it's use of flavorful meats atop a bowl of noodles oftened garnished with lots of fresh, leafy vegetables. Two of the most popular Vietnamese noodle dishes like Bun Cha and Bun Thit Nuong share very similar characteristics, but have also very distinct flavor profiles.

The similarities of both dishes include the use of charcoal grilled pork that is often pre-marinated in a sweet, yet flavorful mixture of various ingredients.

The Difference Between Bun Cha vs Bun Thit Nuong

Bun Cha is a popular in northern regions of Vietnam due to it's origins from the capital city, Hanoi, whereas Bun Thit Nuong is a variation that is found in southern Vietnam. When served, Bun Cha has the meat separated from the noodles sitting inside a sweet papaya dipping sauce with the addition of papaya whereas Bun Thit Nuong has the noodles topped with the meat in a bowl together, with the Nuoc Mam sweet chili sauce drizzled over the noodles. 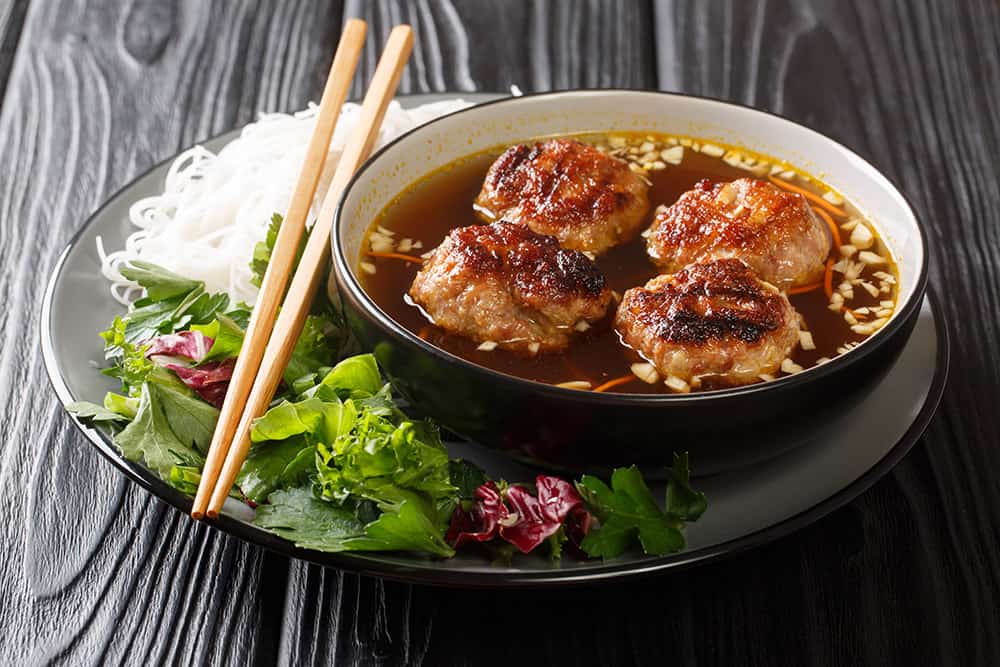 Bun Cha is a dish that is made with marinated, barbequed sliced pork shoulder and pork patties (known as cha). Both the rounded pork patties and sliced pork shoulder are also grilled with a slight char that produces a sweet glaze. The sauce in which the pork patties sit includes a green papaya that is cut into thin, flat squares with water, vinegar, fish sauce, lime juice, garlic, shallots, and sliced serrano chili peppers. Bun Cha is served with a side of leafy vegetables like lettuce and other Vietnamese herbs.

All About Bun Thit Nuong

Bun Thit Nuong is a Vietnamese dish that includes a bowl of cooked vermicelli noodles that is topped with slice pork shoulder that has been marinaded in lemongrass, shallots, garlic, sugar, fish sauce and paprika. It's often served alongside Vietnamese egg rolls that have been sliced with a plate of fresh Vietnamese herb garnishes as well. The nuoc mam sauce is drizzled over the top of the vermicelli noodles and sliced pork, providing a sweet, delicious and hearty dish.

What is an ingredient that is used that is different in Bun Cha compared to Bun Thit Nuong?

Bun Cha uses papaya in the sweet sauce that is generally used in both dishes. The grilled meat, normally a pork patty, is generally sitting in a bowl along side the noodles whereas Bun Thit Nuong has the meat separated from the sauce, which is drizzled over on top.

Nuoc cham is not used in Bun Cha; the differences in the ingredient components of the sauce for Bun Cha include the use of sliced papaya, vinegar, slight fish sauce, and a reduced amount of garlic.

What are the noodles used for making Bun Cha and Bun Thit Nuong?

Bun Cha and Bun Thit Nuong are made using thin vermicelli noodles, which are made of ground rice, characterized by the round ends. Vermicelli noodles should not be referred to as rice sticks, which refers to a different type of noodle used in dishes like Pho and Pad Thai.