In this article, I’m sharing with you the differences between Thai and Laos papaya salad. If you have ever tried either of these deliciously light salads, you’re probably wondering: Thai versus Lao papaya salad, what is the real difference?

The classic green papaya salad is loved throughout southeast Asia in various forms, but the two most popular are the Thai and Lao style papaya salad. 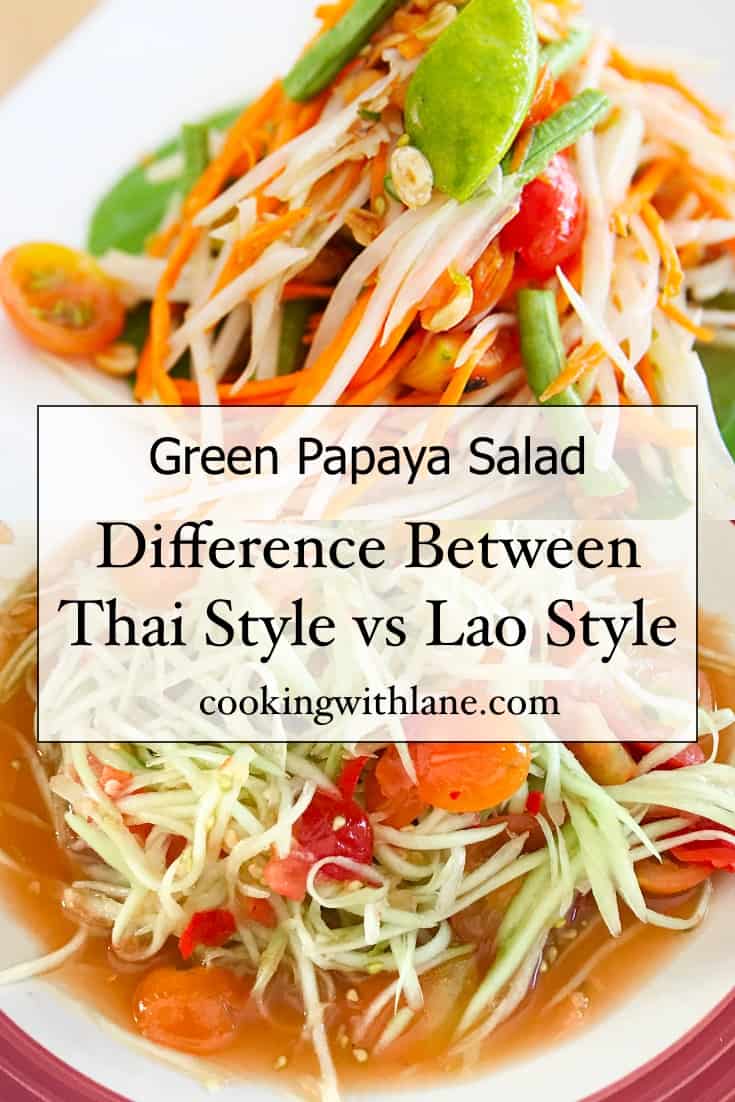 What ingredients do Thai and Lao papaya salad have in common?

Outside of the common ingredients shared with the Laos style papaya salad, Thai versions generally include fish sauce and includes dry shrimp jerky. It is generally topped with roasted peanuts. 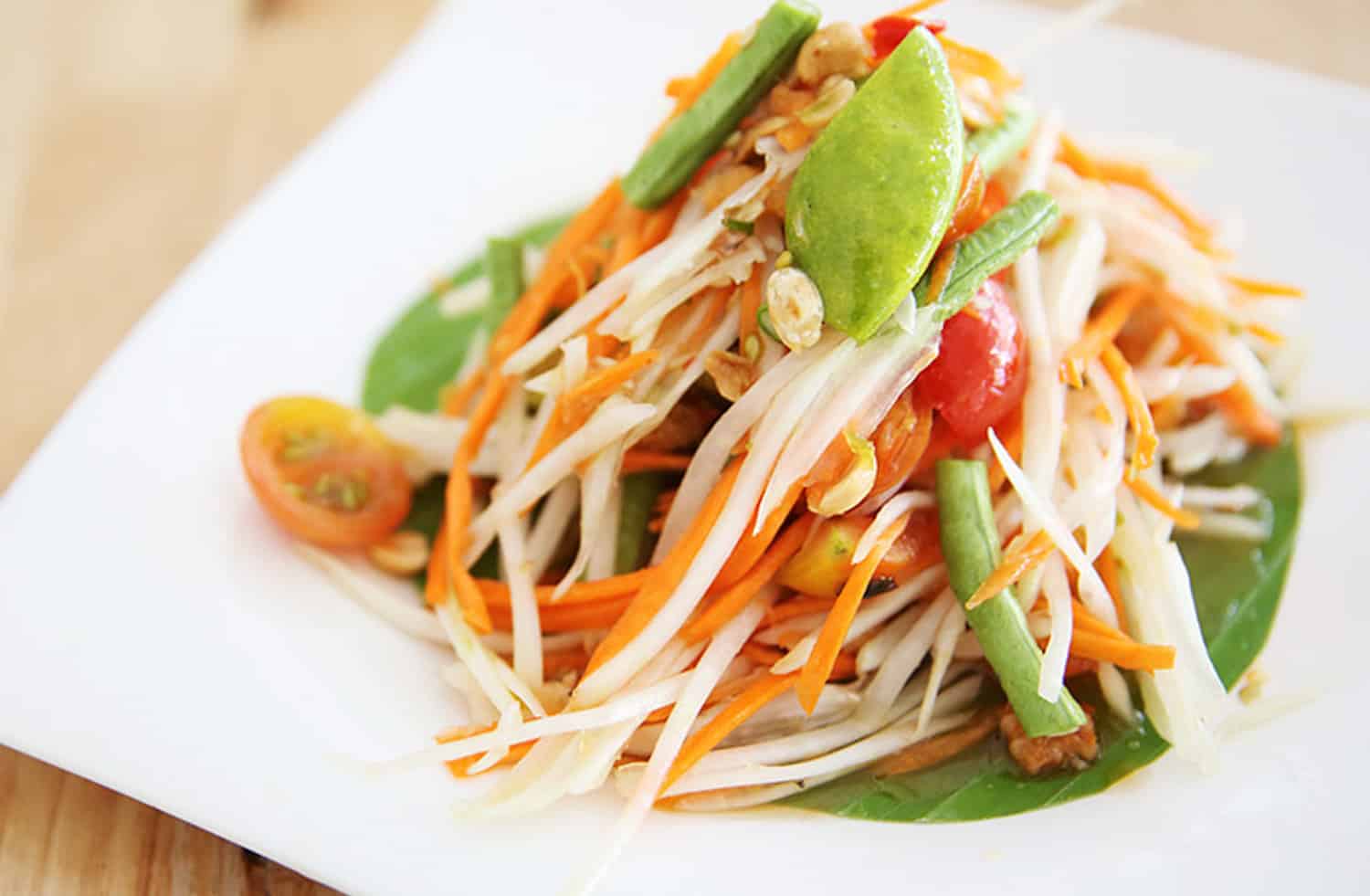 What does som tum mean?

Thai green papaya salad is referred to as som tum. Som means sour and tum refers to the pounding sounds from the mortar and pestle that is used to mix up the ingredients. 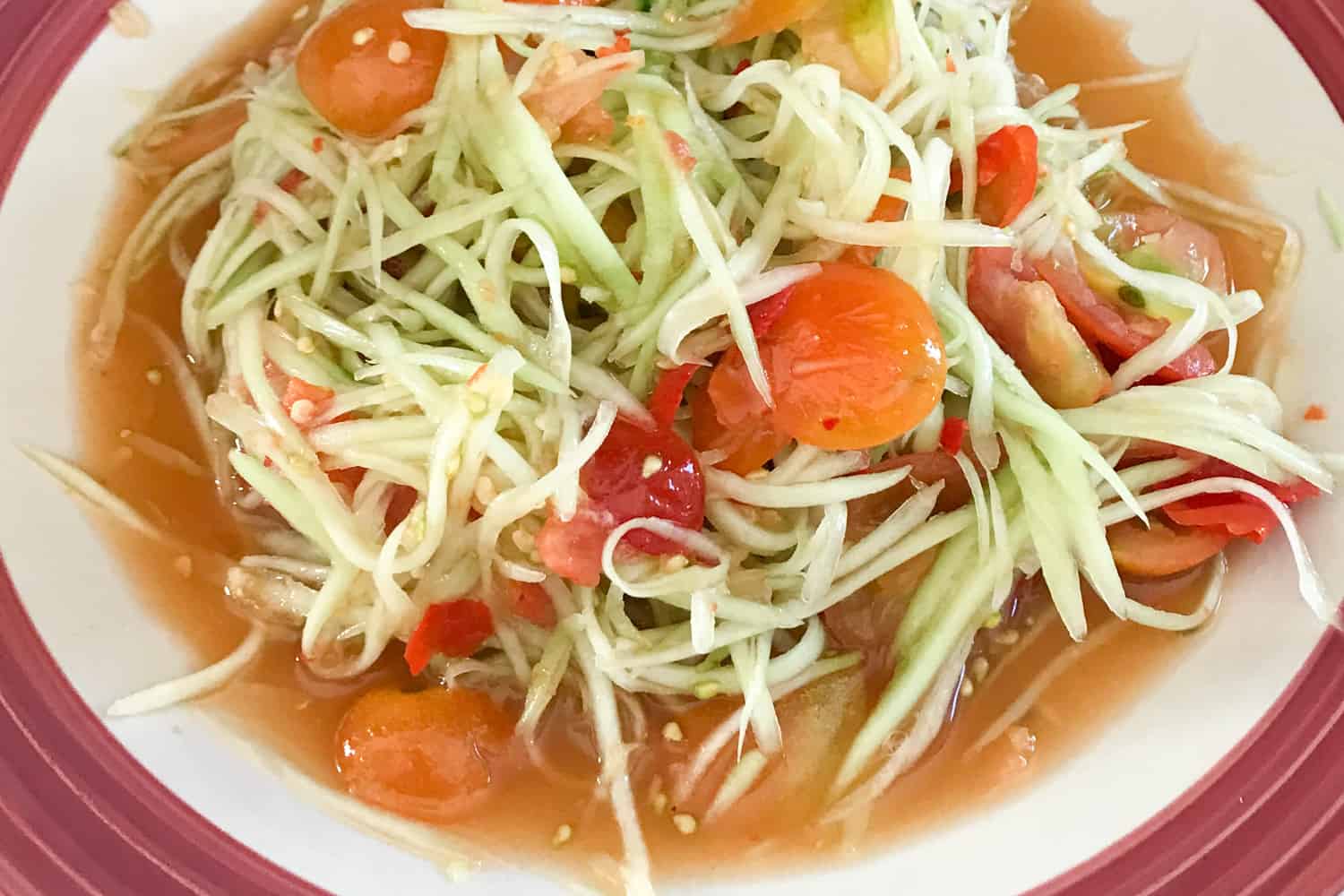 What does tham mak hoong mean?

There is also a Vietnamese version of papaya salad. The difference there is that they add shrimp and meat into the salad.

Specifically, there are other variations of the green papaya salad that you may find in restaurant menus.

Lao and Thai languages are very similar to each other and also share common words between one another. Often, you’ll find Laos and Thai restaurant menus mixed together. There are some Thai restaurants that are owned by Lao people, which often will represent some of the menu items in a mixed Lao and Thai translation.

Other Variations of Green Papaya Salad

Where did green papaya salad originate from?

Green papaya salad originated from Laos. Between the 1970s and early 1990s, there were over 200,000 Lao refugees that made their way into Thailand due to the Vietnam War.

As both cultures melded together, this specific dish was adapted by the Thai. The middle class in Bangkok adapted the recipe to remove what was deemed as “low class” ingredients like fermented fish sauces and pastes. Instead of using padaek and nam pu, a substitute of fish sauce was used as well as making the dish slightly sweeter. This lowered the overpowering flavors of padaek and nam pu, which made it more popular for those that had not yet acquired the Lao palette.

This Bangkok variation was then introduced to the world and added on a global scale by being added on an international menu of things to try while in Thailand.

What is green papaya salad served with?

Where can I find best recipes for Thai and Lao papaya salad? 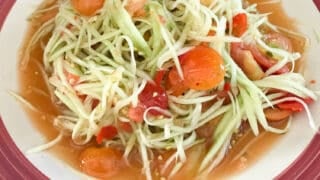 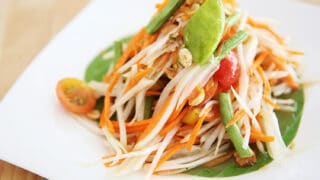 Which green papaya salad is better: Thai or Lao style?

This is a very tough question. As someone who is of Vietnamese descent, but born and raised on Laos, left to Thailand as a refugee, I can attest to you that all of these variations are absolutely delicious.

If you have not acquired the Lao palette to appreciate the umami of fermented fish sauce and shrimp paste, I would recommend the Thai style green papaya salad.

If you want a bursting of flavor and the combination of sweet, sour, bitterness and saltiness, Lao style definitely has more depth of flavor that you won’t find in the Thai style.

Thai papaya salad has a milder flavor than it's Lao counterpart because it uses fish sauce as the dressing.

Lao papaya salad has more ingredients in the dressing.

Lao papaya salad has a much flavorful palette due to the incorporation of fermented fish sauce known as padaek and nam pu which is shrimp paste/sauce.

In the Thai variation of this recipe, roasted and crushed peanuts top the dish for another layer of texture. In some other recipes, cooked shrimp or shrimp jerkey is also used.

Both salads are references by different names in each country.

Thai papaya salad popularized the cuisine around the world.

The middle class in Bangkok, Thailand adapted the original recipe from Laos. They presented it to the world stage and put it on the map with the milder flavors as well as the additional textures of the roasted peanuts. This popularized the dish around the world including the west. 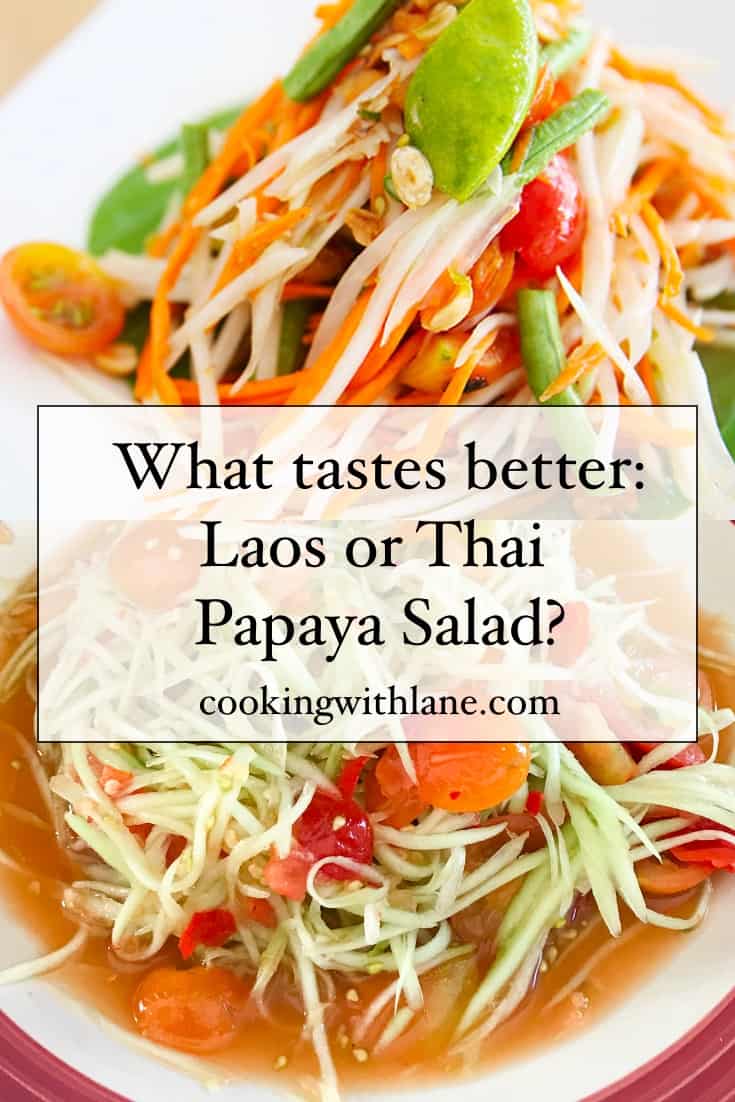