Are you wondering what the difference is between Khao Poon and Khao Soi? I’m going to talk through all of the ingredients in each of these dishes, how each is prepared, and the nutritional components between both of these very popular Thai dishes.

If you love curry, noodles, and soup, you will absolutely love both Khao Poon and Khao Soi, two noodle soups that hail from the country of Thailand.

Each of these dishes are absolutely wonderful and I promise you that you will love both of these delicious dishes. They are both rich, spicy curry noodles that are very popular in Thailand.

Both dishes are often made for family gatherings and to celebrate holidays like New Years.

While they may share similarities because of how the broth is prepared, their differences are due to the noodles that are used as well as the toppings that generally accompany each individual dish. 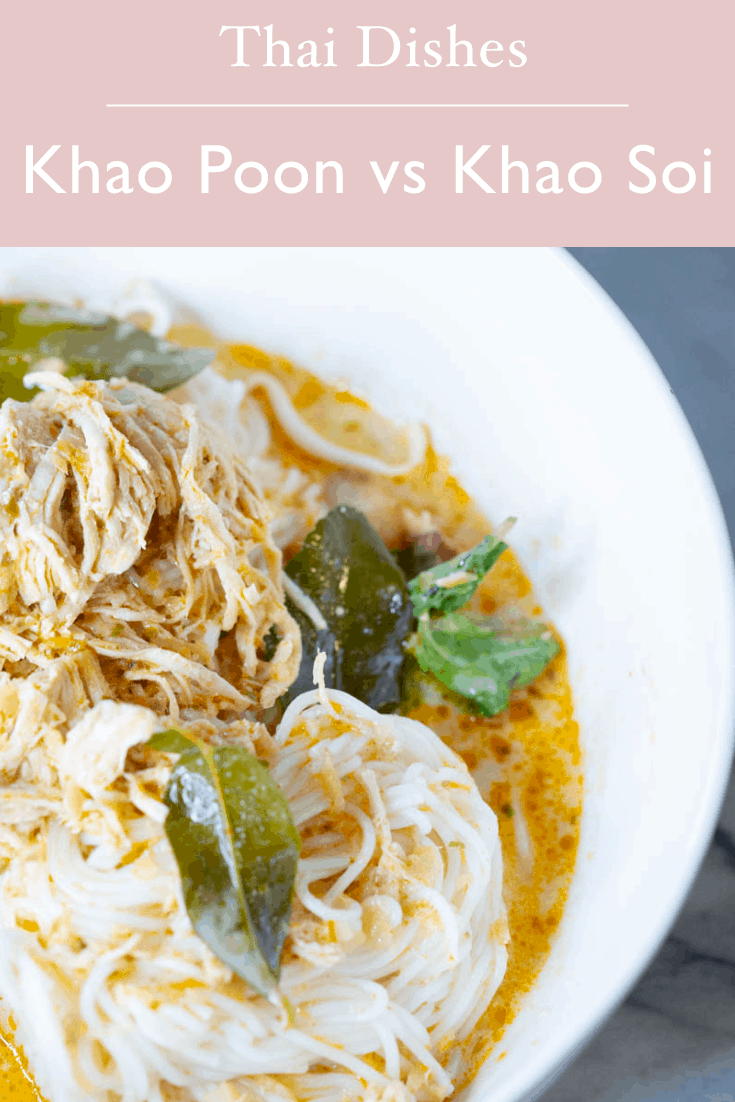 The Difference Between Khao Poon vs Khao Soi

Khao Poon and Khao Soi are delicious coconut-curry based soups that differ in a few of the ingredients inside the broth with the main difference in the type of noodles being used. Khao Poon uses rice vermicelli noodles whereas Khao Soi uses egg noodles. Khao Poon makes use of both ginger and lemongrass as part of it’s broth, whereas Khao Soi makes use of ginger and garlic it’s flavoring.

Khao Poon is a light, semi-spicy Thai noodle dish that is rich in aromatic herbs, vegetables, fragrant spices, with braised chicken and pork. It is known as a spicy, yet fragrant dish that is often referred to as one of the lighter curry noodle dishes. It is generally topped with fresh herbs like mung beans, chopped cabbage, pernilla, and culantro.

Khao Soi has an intensely flavorful curry paste of creamy coconut, curry, toasted chiles, ginger, and garlic. It is a creamy, yet spicy sweet broth served over boiled egg noodles and garnished with crunchy fried noodles.

Origins of Both Dishes

Khao Soi is a dish that has Chinese-Muslim and Burmese influence due to the curry from Muslim culture and noodles from the Chinese. Khao Poon originates from both Thailand and Laos with versions of it being found it Malaysia, Cambodia, and Singapore.

All About Nutritional Content of Khao Poon and Khao Soi

How many calories are in a bowl of khao soi?

One serving of Khao Soi has 574 calories which includes the blend of meats, seafood and egg noodles with a coconut milk, curry based broth.

How many calories are in a bowl of khao soi?

One serving of Khao Poon has 605 calories which includes the blend of meats, seafood and vermicelli rice noodles with a coconut milk, curry based broth.

However, both khao poon and khao soi can vary in calories based off of the overall toppings that are added to the final dish.

Is Khao Poon and Khao Soi the same thing?

Khao Poon and Khao Soi are different because Khao Poon uses egg noodles whereas Khao Soi uses vermicelli noodles. The coconut milk and curry based chicken broth make both dishes quite similar in other aspects.

What type of dish is Khao Poon?

Khao Poon is a Thai and Laotian curry noodle soup dish made with vermicelli noodles.

What type of dish is Khao Soi?

Khao Poon is a Thai and Laotian curry noodle soup dish made with egg noodles.

Is Khao Soi the same as Curry Laksa?

Khao Soi is not the same as Curry Laksa because the difference is that Khao Soi is made with egg noodles and topped with a crispy noodle garnish. Laksa refers to the Malaysian version of a combination of flavors deriving from both Khao Poon and Khao Soi.

Khao Poon is also known as Lao Laksa, which is where the confusion between comparing both dishes may occur. 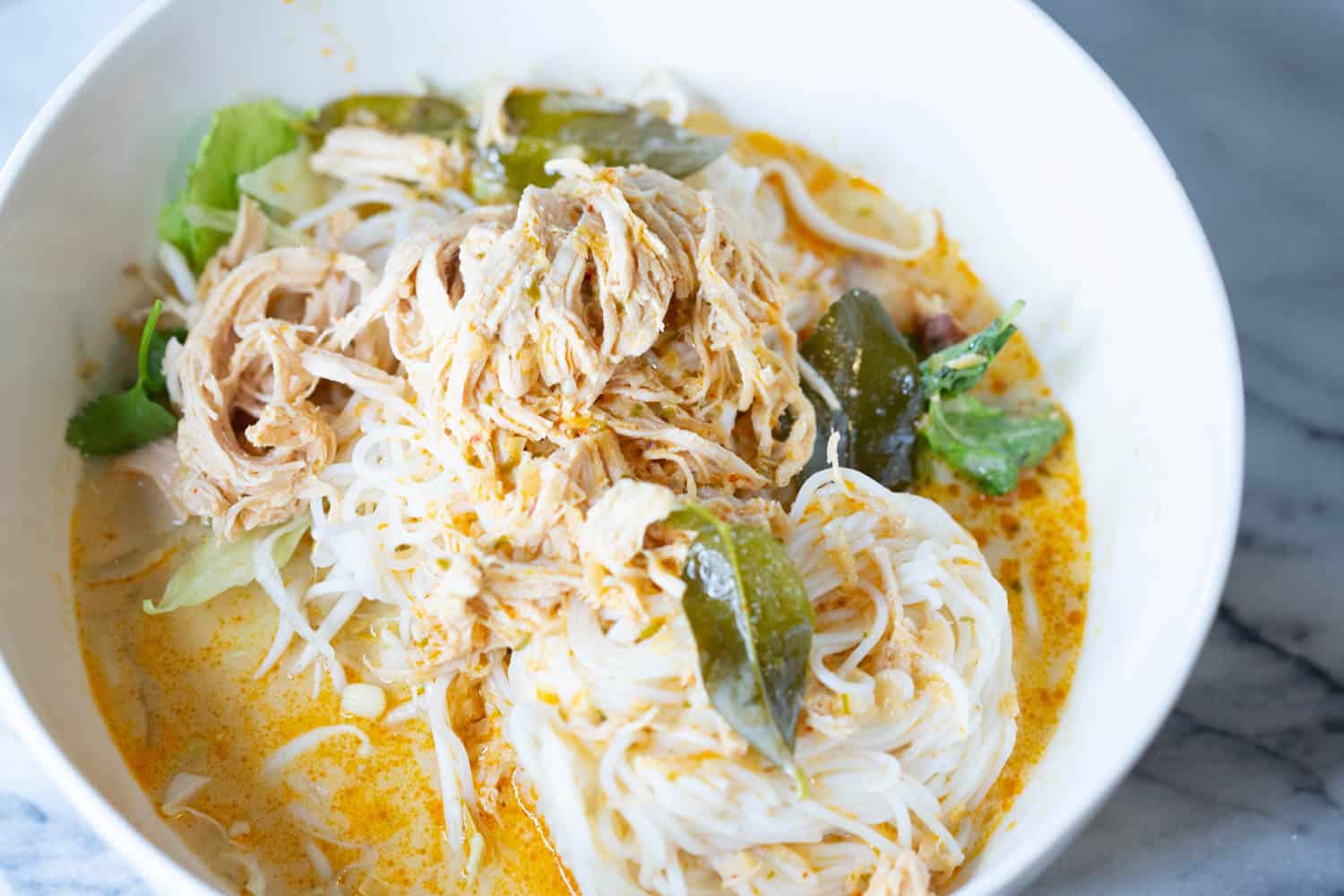 What is Lao Laksa?

Lao Laksa is also known as Khao Poon, which is a coconut milk and curry based soup that uses vermicelli noodles topped with fresh garnishes like cabbage, culantro, and bean sprouts.

Both Khao Soi and Khao Poon are very popular dishes with similar names. They are both noodle dishes that everyone must try at least once.

I hope this guide helped provide some clarity on the differences between Khao Poon and Khao Soi. The next time you visit a Thai or Lao restaurant, you’ll be glad you know the differences when you see this on the menu.