Lad Na vs Pad Thai – What’s the Difference Between These Thai Noodle Dishes?

Are you wondering what the difference is between Lad Na and Pad Thai? In this post, we compare both Thai noodle dishes, ingredients, preparation, and all of the other nutritional components.

Both Lad Na and Pad Thai are two popular dishes that originate out of Thailand. In the streets of Thailand, both noodle cuisines are quite popular sold along the busy roads sold in vendor shops.

If you are wondering what the difference is between both Lad Na and Pad Thai, I’m going to share with you a full comparison of both of these deliciously flavorful and vibrant dishes. 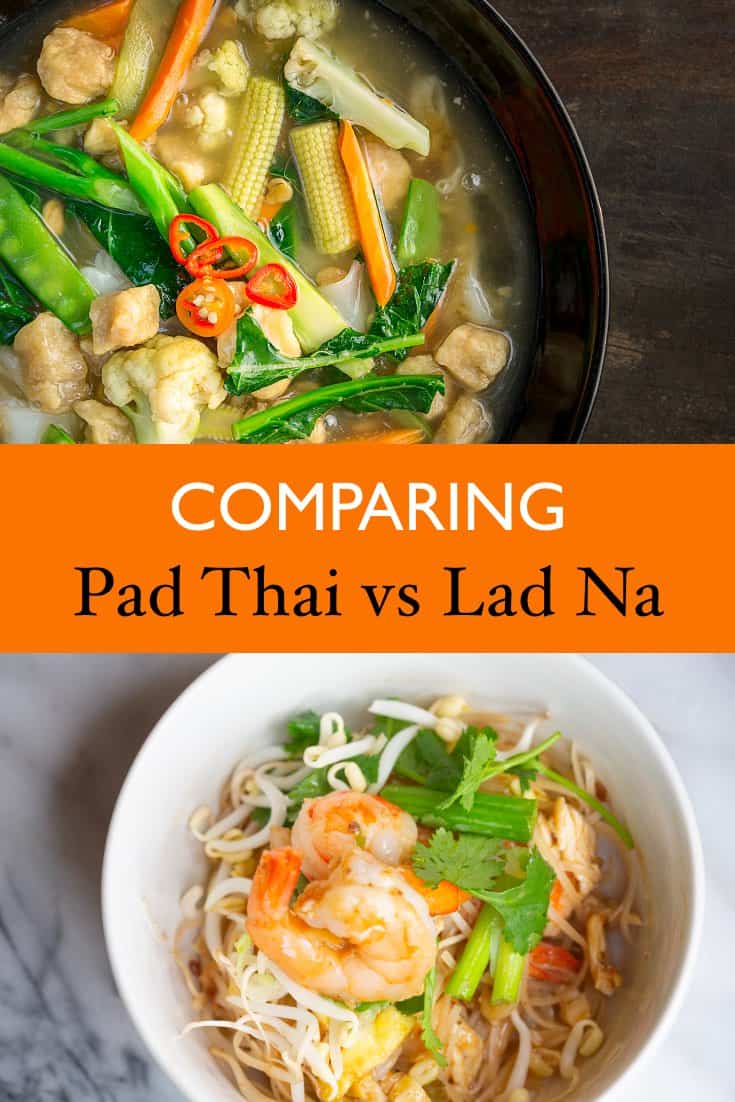 The Difference Between Lad Na and Pad Thai

Lad Na generally has a sweet soupy, gravy consistency that tops wide rice noodles, a mixture of vegetables, and features a protein of pork, tofu, and/or seafood. Pad Thai is a stir fry noodle dish that that brings together a vibrant, flavorful sweet and sour sauce that lightly covers the noodles with or without protein, topped with crushed peanuts and served with lime wedges.

Lad Na is a hearty, flavorful noodle dish made with chewy, wide rice noodles with stir-fried baby corn, Chinese broccoli, mushrooms, kale along with seafood, tofu, or meat that is then covered in a sweet, viscous, and salty thick gravy. It generally is not made spicy and is generally accompanied with a spice tray to personalize the flavors. 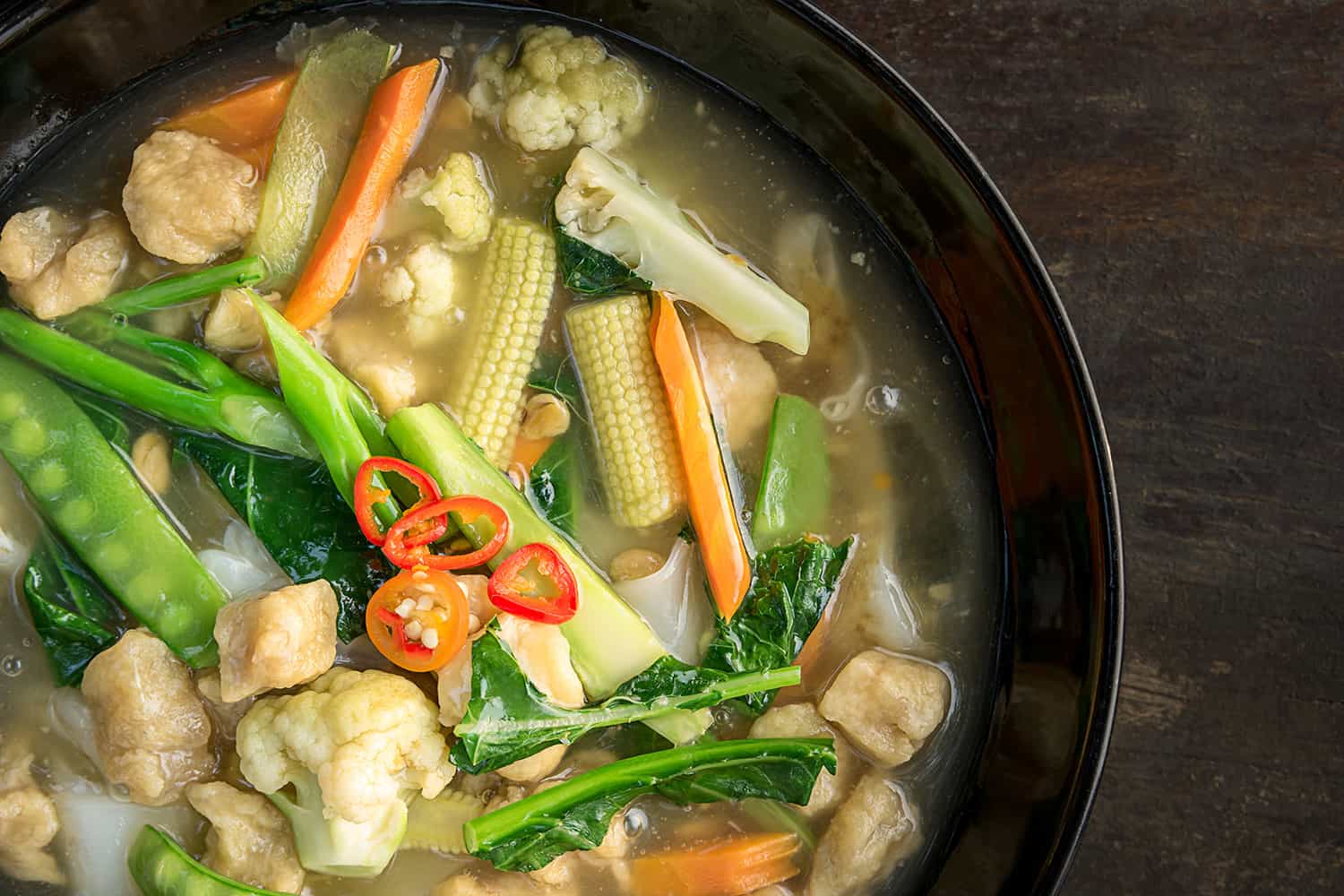 Pad Thai is a noodle dish that is characterized by the balance of sweet, sour, and salty flavors of the sauce due to the use of tamarind paste. It’s a vibrant dish that is made of thin, rice noodles that are stir fried in the sauce and a protein (most popular is chicken) and topped with chopped peanuts for another layer of texture. The heat of the dish can be added in during the cooking process or added with the accompanying spice tray that it is served with.

From Thailand, Pad Thai is the most popular and well-known dish between Pad Thai and Lad Na because of it’s sweet and sour balance of flavors. Lad Na may not be as popular from a taste perspective as the gravy sauce is often referred to as “slimy” or “too soupy”.

How is Lad Na prepared?

Lad Na is a quick dish to cook and prepare. Fresh wide noodles are are fried along with the vegetables and meat. A gravy is then created using a mixture of sugar, soy sauce, and other flavors which is then simmered to make a flavorful gravy that the vegetables, meat, and rice noodles meld into.

How is Pad Thai prepared?

Pad Thai is prepared by cooking the protein, generally egg and chicken, and then creating the sauce with tamarind paste, palm sugar, and other flavorings that the thin rice noodles are tossed in and served with chopped peanuts and lime wedges.

What does Lad Na mean?

What does Pad Thai mean?

The word “pad” in Pad Thai means fried. It is often incorrectly misconstrued for noodle. 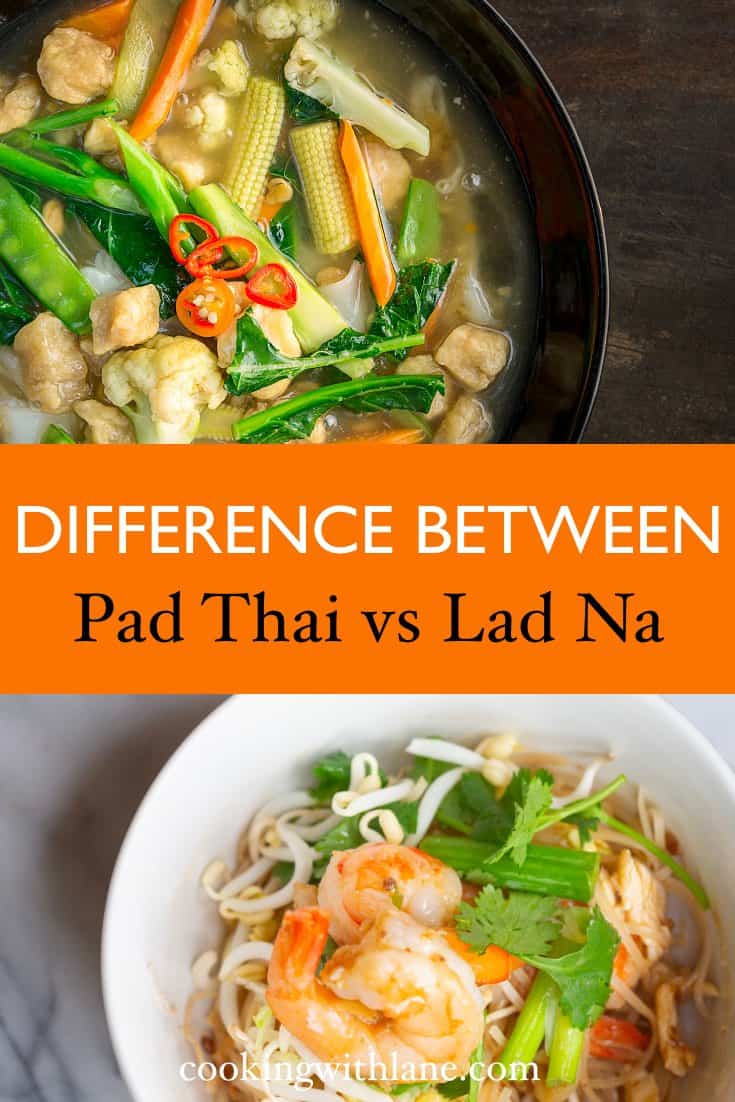 Lad Na is commonly served with sugar, fish sauce, and pickled peppers. The ingredients for Lad Na generally include:

Pad Thai is generally served with a spice plate. The ingredients for Pad Thai generally include:

Is Lad Na the same as Rad Na?

Rad Na is the same dish as Lad Na. The difference in name is because of Thai translation to English, where the “R” is how the cuisine is pronounced in the native Thai language. Thai language doesn’t use “R”, which turns it more to an “L” sounds. Often, Lad Na is referred to the following variations in English:

This is a 30-minute Pad Thai recipe that makes it really easy to make this dish on a week night.

For Lad Na, fresh wide noodle dishes are preferred over dry noodles that are cooked. However, in a pinch, you can use some dry, wide flat rice noodles to make Lad Na.

As you can see, while both Lad Na and Pad Thai share a common ingredient, rice noodles, they are in fact very different noodle dishes. I hope this helped you understand the differences between these two popular noodle dishes from Thailand!

If you loved this comparison between Pho and Pad Thai, you might also love these posts:

Did you make this recipe?
If you made this recipe, don’t forget to leave a 5 star review! Please share on social with #cookingwithlane or the “I made it” feature button on Pinterest! 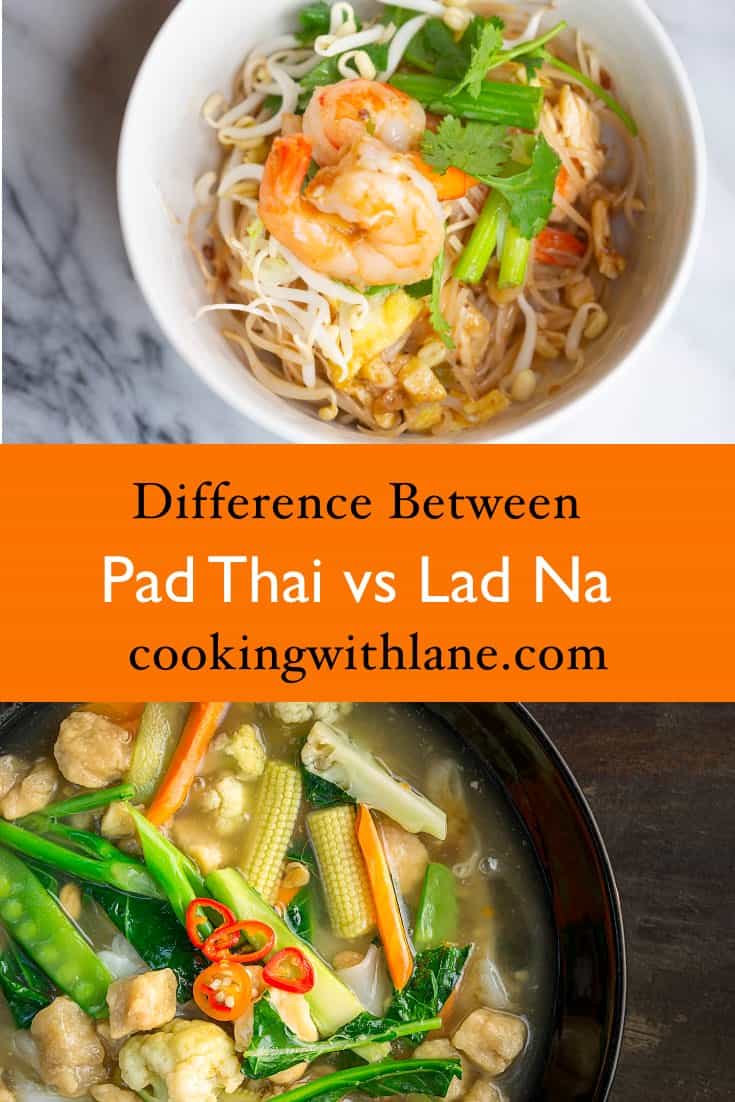