Are you wondering what the difference is between Pho and Pad Thai? I'm going to talk through all of the ingredients, the preparation, as well as the nutritional component comparisons between both of these very popular Southeast Asian dishes.

Pho and Pad Thai are very popular noodle dishes that have it's origins from two Southeast Asian dishes. Both dishes are similar in that they use the same rice stick noodles, however after that, the differences are very drastic.

Pho and Pad Thai are of different regional cuisines. Pho hails from Vietnam whereas Pad Thai has its origins from Thailand.

Similarities Between Pho and Pad Thai

Pho and Pad Thai both commonly contain meat, vegetables, and rice sticks. Both dishes also utilize soy sauce, fish sauce, and sugar as a part of the cooking and preparation process.

The Difference Between Pho and Pad Thai

Pho is Vietnamese cuisine whereas Pad Thai is Thai cuisine. Pho is commonly seen as a beef or chicken broth based soup that includes noodles topped with fresh vegetables. Pad Thai is a stir fry noodle dish that melds together fish sauce, vinegar, sugar, and tamarind paste.

Pho Xao is Vietnamese dish that also gets compared with Pad Thai. Pad Thai is different than Pho Xao because of the tamarind paste, lime, and rice vinegar that provides the sweet and sour taste it is known for.

Pad Thai has a blend of sweet, salty, sour, and umami. Because of the palm sugar that is used, it's not as sweet as using granulated sugar. The saltiness comes from the fish sauce. The tamarind paste provides the texture and sour that Pad Thai is known for. 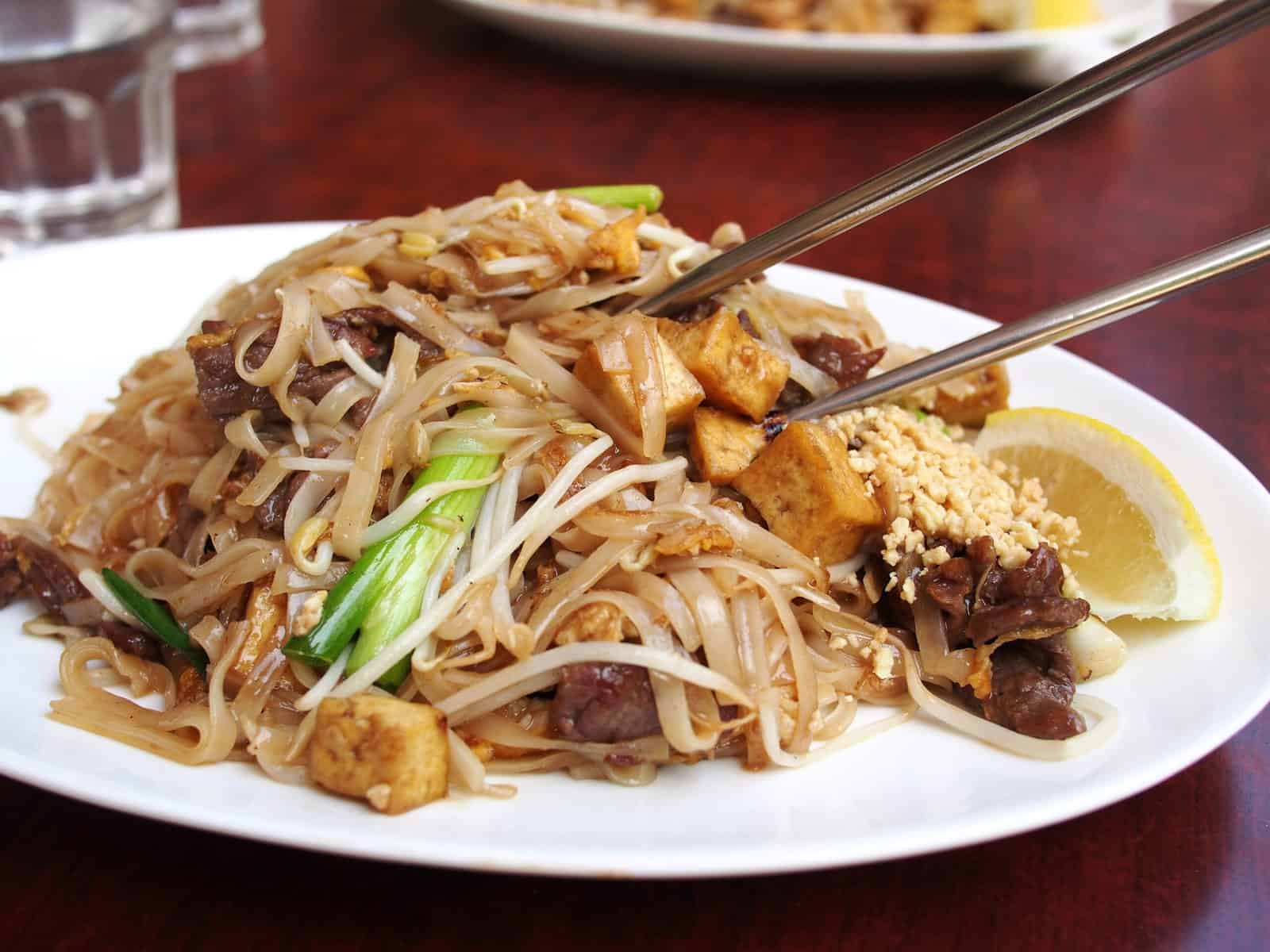 Pho has the a balanced meld of sweetness and smoky depth married also with umami. The broth is made from roasted beef bones with an infusion of spices like star anise, cinnamon, and coriander to provide a very distinct, yet complex flavor profile. The broth includes rice sticks that are then added and then topped with several fresh herbs like mung bean sprouts, Thai basil, and culantro.

In one serving of Pho, there are 450 calories. In one dish of Pad Thai, there are 1,131 calories. From a calorie perspective, Pho has the least amount of calories compared to Pad Thai.

Is Pho the same as Pad Thai?

Pho is a different dish than Pad Thai. Pho is a Vietnamese broth-based noodle soup that is often topped with fresh vegetables. Pad Thai is a Thai stir fry noodle dish that is often mixed with proteins egg, chicken, or pork.

What's the difference between Pho Xao and Pad Thai?

Pho Xao is a different dish than Pad Thai. Pho Xao is a stir fry with origins from Vietnam whereas Pad Thai hails from Thailand. While both cuisines share similarities in that they contain rice sticks, meat, and vegetables, the difference is that Pad Thai has additional ingredients like tamarind paste and palm sugar, which gives it a sweet and sour flavor profile whereas Pho Xao is milder in flavor when compared to Pad Thai.

Is Pho and Pho Xao the same thing?

Pho and Pho Xao are not the same cuisine. While both dishes are Vietnamese cuisines that use rice sticks, that's where the similarities end. Pho is a rich broth based noodle soup that incorporates rice sticks topped with fresh vegetables. Pho Xao is a stir fry noodle dish that combines proteins like chicken, pork, or beef with vegetables like bok choy in a blend of spices and condiments like soy sauce, sugar, and fish sauce.

If you are looking for some recipes that you can try at home, I wanted to share with you two recipes that I think you'll absolutely love on my blog.

With all of my recipes, I make sure that I provide you a full ingredient list, which includes what you may need to get at a specialty Asian supermarket. When I can, I try to provide photos of the ingredients so that you can identify them at the store.

Now that you know the differences between both of these dishes, why not try Pad Thai on a busy weeknight? In this recipe, I share how you can make Pad Thai without making the sauce from scratch, saving you a ton of time.

Everyone who has ever eaten Pho knows that the magic is in the broth. You have good pho when you have an amazing broth. Pho is known to be a very complex broth to make, but when done right, it's worth the wait. It is one of the richest broths you'll find on the planet due to the complexity involved in the production of infusing all of the spices together. Check out my recipe to make your own.

Both Pho, Pho Xao, and Pad Thai are delicious and very popular Southeast Asian cuisines that are savory, delicious, and have umami.

I hope this guide helped provide some insight on the differences and similarities between these two dishes. The next time you head to your local Vietnamese or Thai restaurant, you'll know exactly what to order and know the differences between each of these cuisines so you know what to expect. 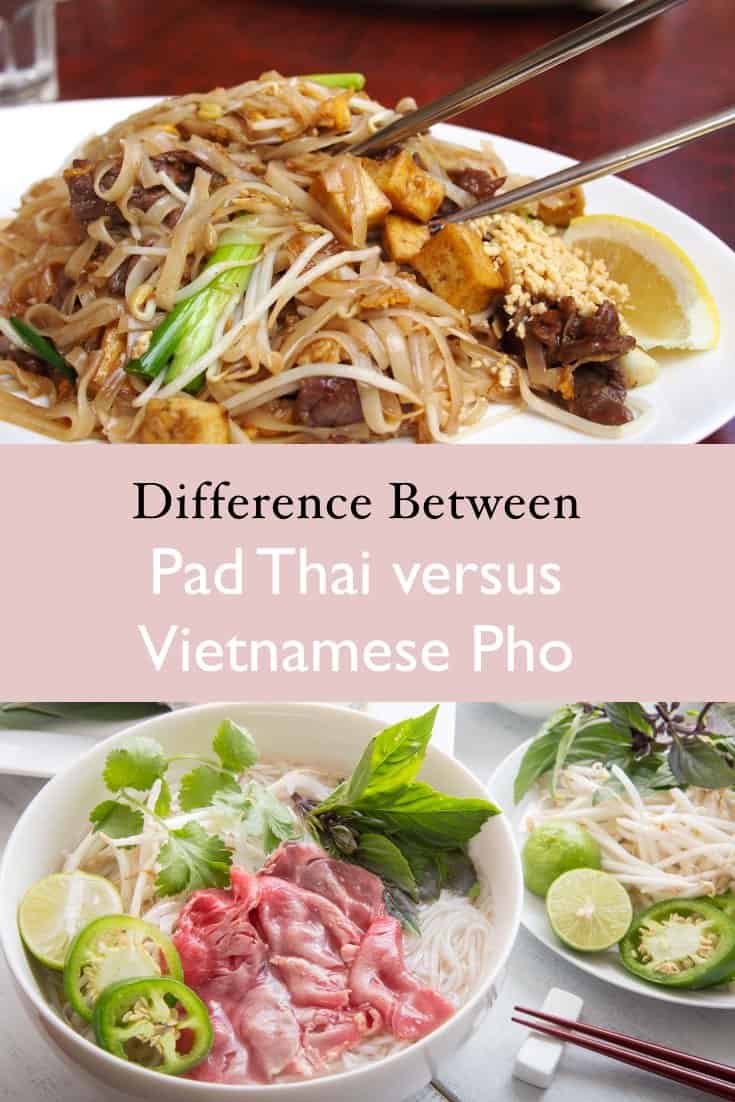 If you loved this comparison between Pho and Pad Thai, you might also love these posts: