Are you wondering what the difference is between Pho and Bun Rieu? I'm going to talk through the ingredients, the preparation, as well as nutritional comparison between both of these very popular Vietnamese noodle soup dishes.

Pho and Bun Rieu are different in that Bun Rieu includes seafood like crab meat whereas Pho is made with either beef or chicken stock that is simmered for hours along with some other seasonings. 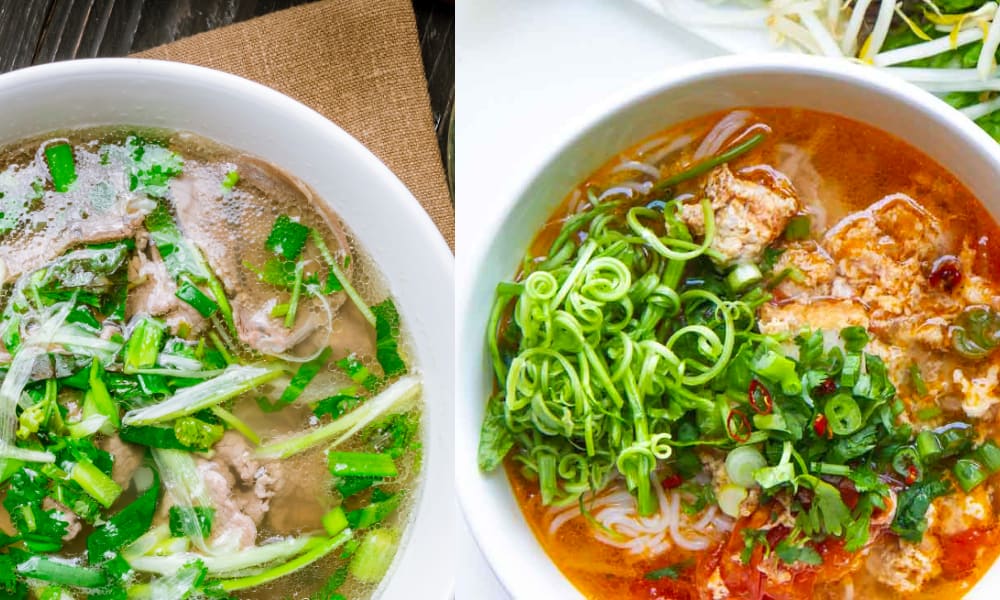 The Difference Between Vietnamese Pho and Bun Rieu

Pho is an popular noodle soup made with broth cooked with beef bones (and often chicken) with a variation of spices with rice noodles topped with sliced beef, fresh herbs, and bean sprouts. Bun Rieu is a crab ball and pork vermicelli soup that is also simmered for hours with a slightly tangy and sour broth.

While Bun Rieu has a slightly sour note, with the broth made from rice paddy crabs, shrimp paste, and tomatoes along with a topping of green onions, cilantro, and perilla, Pho has a tender, meaty flavor with the chewy rice noodle sticks that are cooked in the broth.

Both dishes share commonality in that a bed of fresh herbs and vegetables on top the soup noodles. 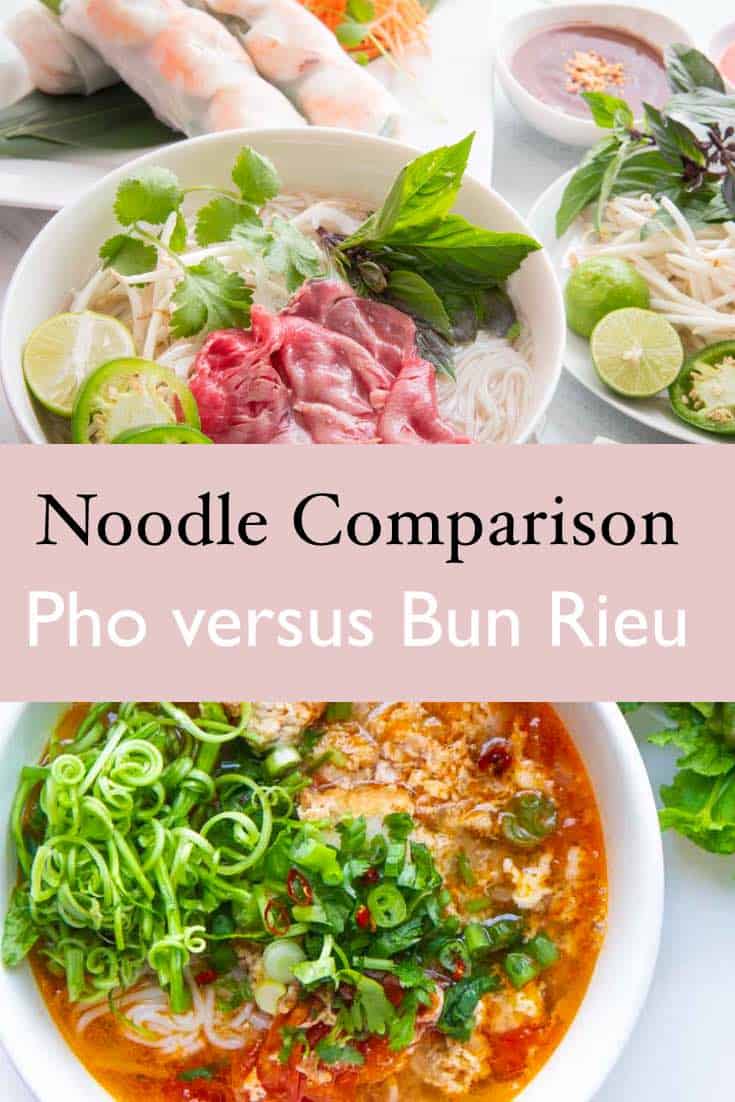 Pho is a Vietnamese soup made with broth, rice stick noodles, and some form of sliced meat (whether chicken, pork meatballs, beef brisket, beef slices). A bowl of Pho traditionally comes with accompaniments of fresh vegetables like fresh cilantro, basil, bean sprouts, and lime add on top of the soup. Pho noodles are rice noodles, which are translucent and light. Often, the soup is served with slim cuts of beef which are often cooked inside of the serving bowl along with softening the rice sticks when served.

Pho broth is generally deep in flavor, but when served, most people with personalize it to suit their own taste. You can add black pepper, chili oil, hot sauce, soy sauce, sugar, hoisin sauce, and a variety of fresh herbs to accommodate a variety of taste buds.

Bun Rieu is a Vietnamese crab based soup noodle dish that is made from crab paste (from paddy crabs) with stewed tomatoes that provides a slightly tart, sour taste with a blend of natural sweetness. A bowl of Bun Rieu normally comes topped with a cloud of a pork and crab mixture placed on top of vermicelli noodles with accompaniments of fresh vegetables like fresh cilantro, green onion, basil, perilla, water spinach, and bean sprouts on top of the soup. Bun Rieu is made from vermicelli rice noodles, which are white and thin.

Bun Rieu provides a complex combination of ingredients. When served, the dish has a slightly red and orange tint to the clear broth noodles. It is a rice vermicelli noodle soup that combines crab and pork into a meatball into a tomato broth along with shrimp paste. The flavor profile is distinct and undeniable with its tangy, sour, yet savory soup that brings out the crab flavor profile.

Pho originated in the northern city of Hanoi and has been adapted across various regions. Furthermore, there are a multitude of adaptations of this delicious noodle dish across Southeast Asia.

The broth is made from simmering beef bones, garlic, star anise, charred onions, clove, and cinnamon. Vietnamese pho in is made of a bowl of rice noodles, topped with thinly sliced raw beef, which is cooked when ladles of beef broth is poured on top.

Pho refers to the flat rice noodles, not the soup. Generally, you'll find variations of Pho like below:

Bun Rieu is simmered with pork bones and/or dried shrimp for generally hours to make the soup (cheater Bun Rieu recipe in half the time). Authentic vermicelli noodles used in Bun Rieu allows the subtlety of the noodles, yet also allows the crab essence to shine in this dish. The tumeric, red tomato, and green veggies along with this light red, but clear broth stand out from other Vietnamese soup noodle dishes.

Is Bun Rieu the same as Pho?

Bun Rieu and Pho are not the same noodle dish. Bun Rieu is a crab-based vermicelli noodle dish whereas Pho is a beef or chicken broth based noodle dish. Both serve fresh vegetables accompanied over the top of the soup noodle.

What is healthier - Bun Rieu versus Pho?

Summary of Differences Between Bun Rieu Compared to Pho

Both Bun Rieu and Pho are delicious and very popular Vietnamese soup noodle dishes that are both very distinct from one another. One is a seafood based broth dish whereas another is a beef/chicken broth dish.

While Pho and Bun Rieu may appear to be similar because of its use of noodles, broth, and fresh vegetables, each soup noodle bowl stands on it's own with it's unique, ubiquitous flavor profile. Bun Rieu provides the tangy, sour notes for those looking from departing from the ever popular hearty, customizable dish of Pho.