Are you wondering what the difference is between Bun Rieu and Bun Bo Hue? I'm going to talk through the ingredients, the preparation, as well as nutritional comparison between both of these very popular Vietnamese dishes.

Bun Rieu and Bun Bo Hue are different in that Bun Rieu includes seafood like crab meat whereas Bun Rieu is made with pork broth with additional seasonings that make it spicier than that of Bun Rieu.

The Difference Between Vietnamese Bun Rieu and Bun Bo Hue

Bun Rieu is a crab ball and pork vermicelli soup whereas Bun Bo Hue is a spicy beef vermicelli noodle soup. Bun Rieu has a slightly sour note, with the broth made from rice paddy crabs, shrimp paste, and tomatoes along with a topping of green onions, cilantro, and perilla. Bun Bo Hue has a deep, rich broth made from pork hocks with sliced beef briskets and cha lua on top, which makes it a meatier soup noodle dish that is then topped also with similar toppings like perilla, cilantro, and Vietnamese mint.

Both dishes share commonality in that they both use vermicelli noodles that are covered with the soup base and then fresh herbs and vegetables on top.

The vermicelli noodles that are used in Bun Bo Hue are generally thinner in diameter than those of Bun Bo Hue. However, the choice in noodle size often vary from regions, restaurants, and home cooks due to preference. 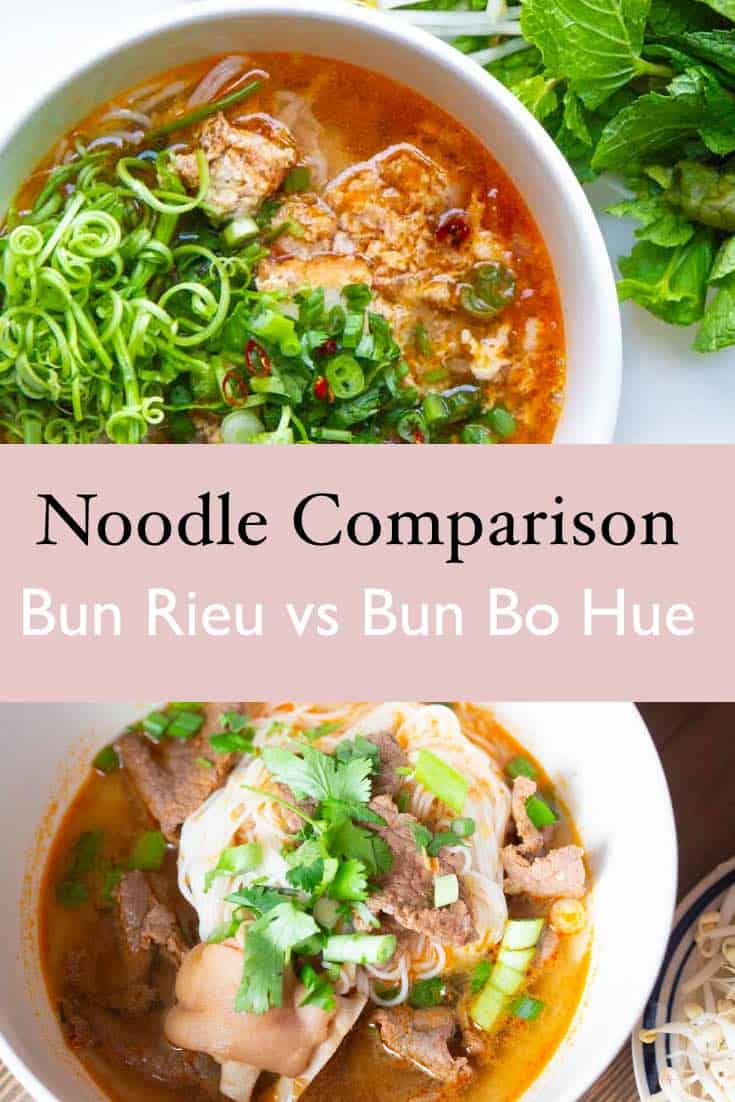 Bun Rieu is a soup for those that love seafood, but want a combination of noodles to go along with it. Bun Rieu is a rice vermicelli noodle soup that combines crab and pork into a meatball into a tomato broth along with shrimp paste. The flavor profile is distinct and undeniable with its tangy, sour, yet savory soup that brings out the crab flavor profile.

Bun Bo Hue is a multi-faceted soup that starts with pork shanks and beef bones with it's broth flavor made with lemongrass, annatto, shrimp paste that includes vermicelli rice noodles topped with herbs, a lime, and sliced beef brisket. It's a spicy soup that originates from the imperial city of Hue, in central Vietnam. The broth is simmered for hours, which allows it to yield a full-bodied and robust vermicelli noodle soup that is bursting with flavor and spice. 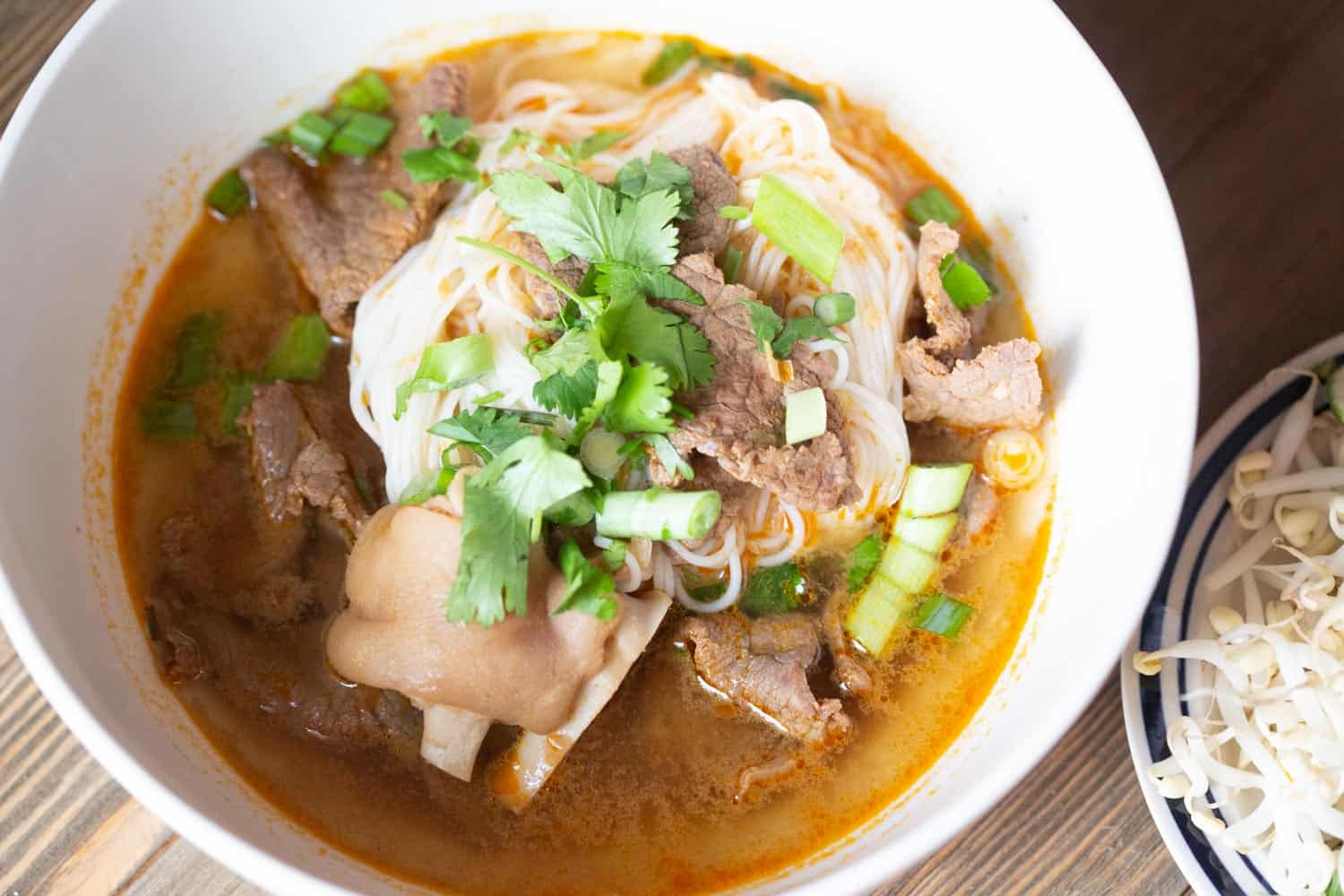 Bun Rieu is simmered with pork bones and/or dried shrimp for generally hours to make the soup (cheater Bun Rieu recipe in half the time). Authentic vermicelli noodles used in Bun Rieu allows the subtlety of the noodles, yet also allows the crab essence to shine in this dish. The tumeric, red tomato, and green veggies along with this light red, but clear broth stand out from other Vietnamese soup noodle dishes.

Bun Bo Hue originated from Hue a central city in Vietnam. The broth of Bun Bo Hue is made from beef and pork bones. This delicious soup noodle dish is made by simmering pork and beef bones that is then seasoned with lemongrass, fermented shrimp paste, sugar, and annatto seeds. It is served with vermicelli noodles that is then topped with beef brisket, cha lua, Thai basil, wedges, banana blossom, and bean sprouts.

Is Bun Rieu the same as Bun Bo Hue?

What is healthier - Bun Rieu versus Bun Bo Hue?

Both Bun Rieu and Bun Bo Hue are delicious and very popular Vietnamese soup noodle dishes that are both savory and delicious. They both have undeniably complex broth flavors that are very distinct from each other.

While Bun Bo Hue and Bun Rieu may appear to be similar because of the generalized ingredient list, each noodle dish stands on it's own with it's unique, ubiquitous flavor profile that is sure to delight all appetites.

If you loved this comparison post between Bun Rieu and Bun Bo Hue, you might also love these posts that show you how to make it as well as similar recipes that you might like: