You are here: Home / Thai Recipes / What’s the Difference Between Pad Thai and Lo Mein?

Pad Thai and Lo Mein are two of the most popular Asian noodle dishes to reign as prominent recipes to hail from the east. I’m going to share with you a comparison of these two dishes and what sets them apart in terms of origins, taste, and authenticity.

What’s the difference between Pad Thai and Lo Mein?

Pad Thai is a Thai noodle dish made with softened vermicelli noodle sticks that is stir fried with sweet tamarind sauce, scrambled egg, and protein topped with crushed peanuts. Lo Mein is a Chinese noodle dish where the wheat noodles are parboiled, tossed with a light sauce, and added to a wok after the veggies and protein have been cooked. 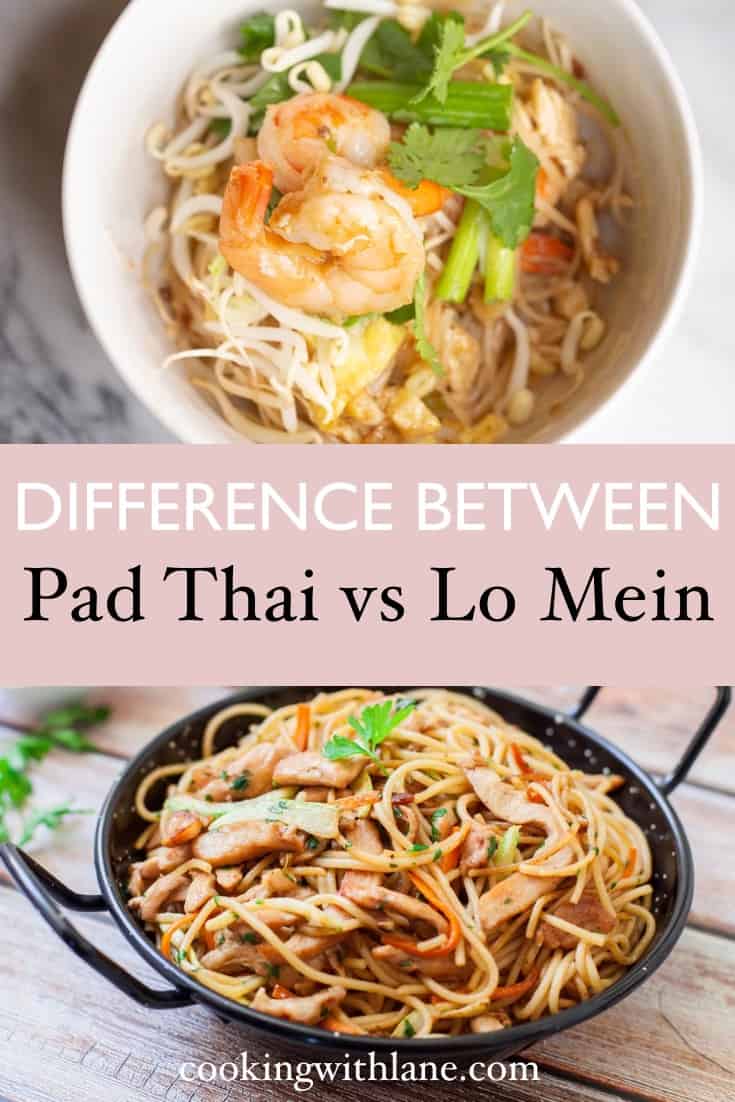 The difference in taste between Pad Thai and Chicken Lo Mein is that Chicken Lo Mein has an oil base that it is cooked in, which lubricates the round noodles that are tossed along with the other ingredients.

Pad Thai is made with flat vermicelli noodles tossed in a sweet tamarind sauce, which provides a sweet and sour experience in one bite.

Pad Thai has a blend of sweet and salty due to the tamarind pulp, fish sauce, garlic, red chilli peppers, and palm sugar.

Lo Mein is slightly sweet and savory because garlic, ginger, soy sauce, and oyster sauce are tossed lightly with a sesame oil base during the cooking process. 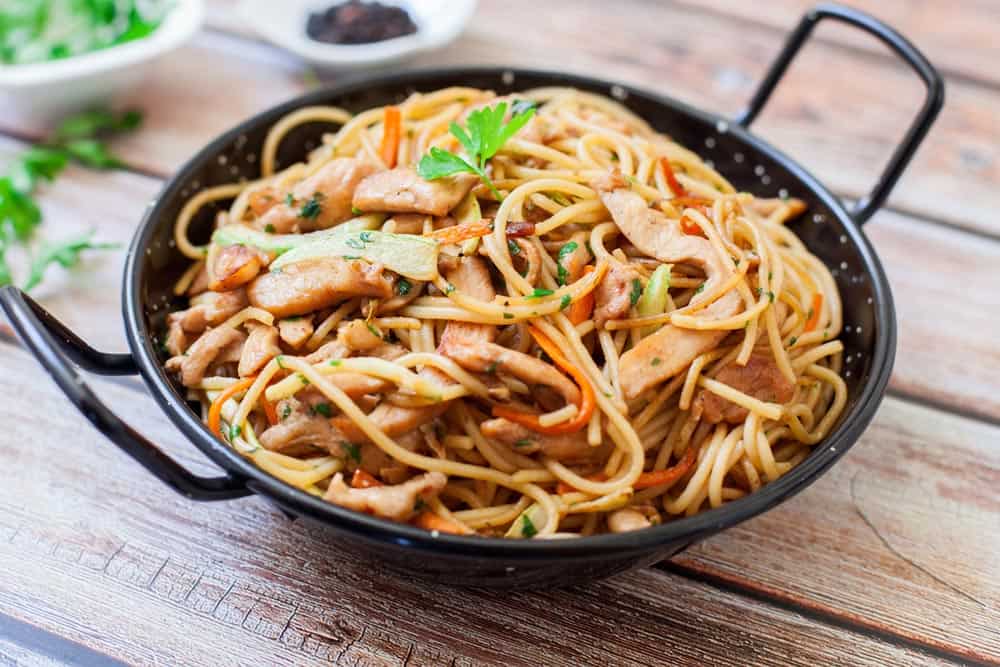 Pad Thai is definitely an authentic, traditional dish from Thailand modified from noodle dishes from the Chinese. 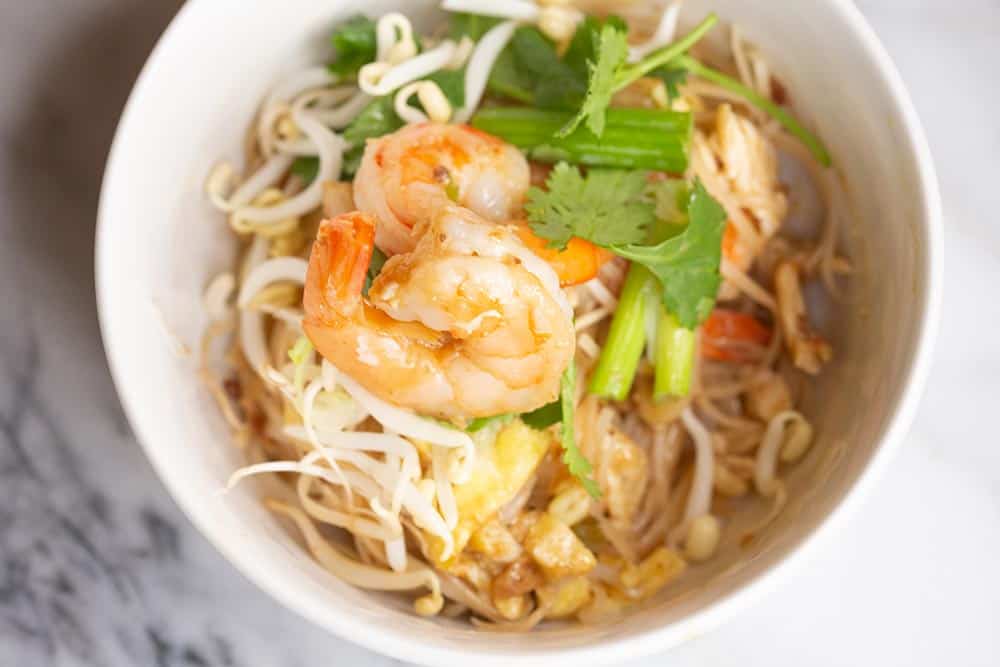 Chicken Lo Mein is an authentic, traditional Chinese dish generally made with bok choy, mushrooms, and cabbage. Generally, in comparison to it’s western adaptation, in China, the sauce is lighter in flavor and is more liquid with fewer ingredients.

The translation of Pad Thai is that the “pad” means fried” and the “Thai” refers to the region, hence Pad Thai.

The translation of Lo Mein is that the “lo mein” means “stirred noodles” in Catonese.

Pad Thai has 357 calories per cup whereas Lo Mein has 310 calories for the same serving. These calorie comparisons are based on the traditional ingredients in these noodle dishes. The calorie count may vary depending on the vegetables used as well as the protein that is added.

What are other similar noodles to Pad Thai and Lo Mein?

Noodle dishes that are similar to Lo Mein that are from China include Chicken Chow Mein, Shanghai Stir-Fry, Sichuan Noodles, Pan-Fried Noodles, and Singapore-Style Noodles.

Noodle dishes that are similar to Pad Thai that are from Thailand include Pad See Ew, drunken noodles, and Pad Kee Mao.

These popular noodle dishes both contain fish sauce. However, you can opt to remove them from your recipe or request that your cook not include them. You can also substitute the protein for firm tofu as needed in order to make it vegan friendly.

What is harder to cook: Pad Thai or Lo Mein?

Both have similar cooking styles in that you can stir-fry or toss the noodles in a wok. Lo Mein requires a sesame oil base whereas the other requires a tamarind sauce that the noodles will be stirred in.

Summary of Comparison Between Pad Thai and Lo Mein

Both of these noodles are very popular dishes that hail from Asia. Pad Thai is one of Thailand’s most popular recipe exports, and Lo Mein can be found in westernized Chinese restaurants around the nation. Both are savory, delicious noodle dishes that should be tried. 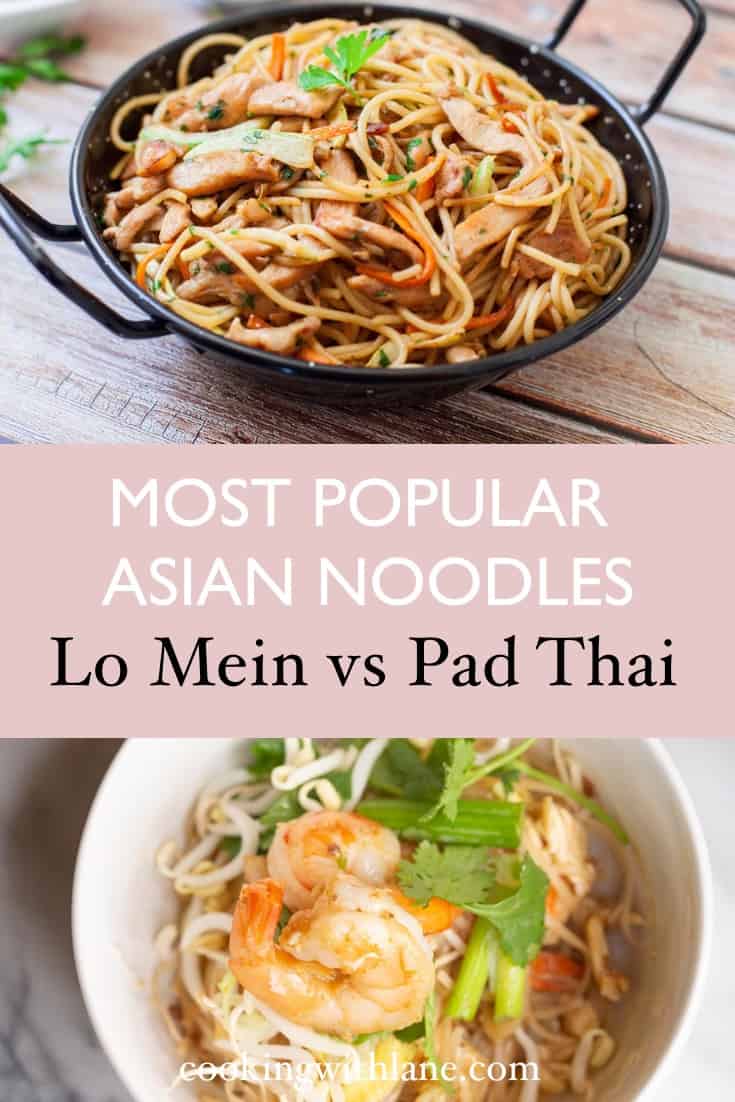 Pad Thai and Lo Mein are noodles that are both usually cooked with protein. While they have different noodles, vegetables, and sauces, the cooking methodology is quite similar – you stir-fry it or toss it in a wok over the stove.