You are here: Home / Lao Recipes / What is the difference between Thai food and Laotian Food?

If you ever wanted to experiment with other southeast asian foods, Thai food and Laotian food might be on your list. While both share similarities in dish preparations and some flavors, there are a vast list of differences between these two cuisines. 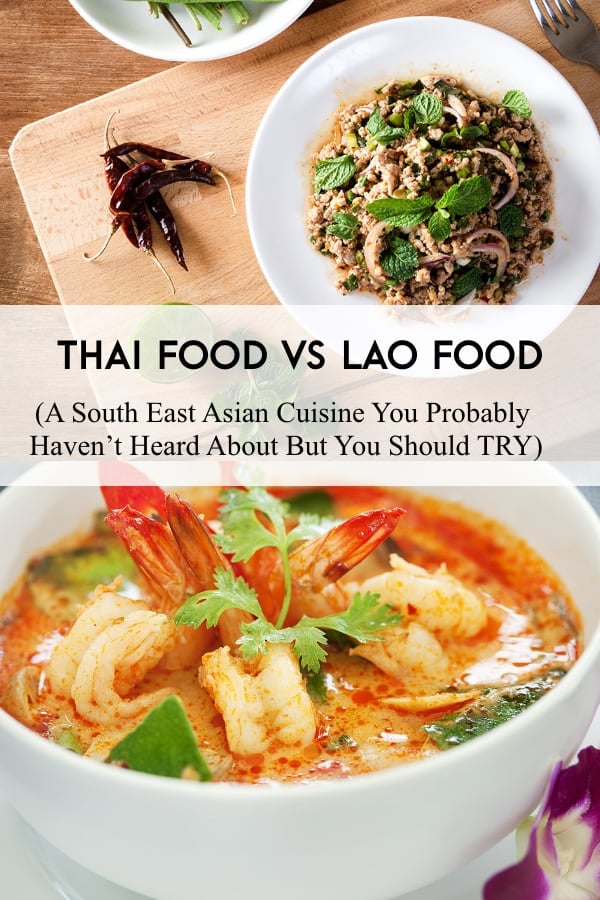 What’s the main difference between Laotian food and Thai food?

Both Laotian and Thai food have delicious and distinctive flavors. The difference is that compared to Thai food, Lao cuisines tend to have herbs and vegetables that aren’t simmered or have overnight marinades required. Thai food is typically served individually whereas Lao food is more family style. Most importantly, sticky rice is an important staple in Lao food whereas Thai food uses traditional white rice.

Comparing Flavors and Tastes Between Thai food and Laotian Food

Food from Thailand is typically has more curry, has a heavier base of curry, and much richer in flavor due to the coconut milk base in much of it’s cuisine. Lao food uses more lime and tends to lean on the saltier side and makes heavy use of padaek, which is made of fermented fresh water fish.

Why is Thai food more popular than Lao food?

In general, the western public may have a better concept of Thai food because Thailand has a strong cooking tradition that produces well trained chefs that come to the United States to open up restaurants.

There is also a theory that Thai that came during the Vietnam war were more prepared than their Lao counterparts to start a small business because they had more monetary resources. During the war, a larger population of Laotians came to the United States as refugees.

In addition, Thailand has welcomed western tourism longer than Laos, so that might also be a factor in why Thai food is more popular and has gained more momentum in America.

With that said, you will find that some Thai restaurants do serve Lao food. And often, you’ll find that there are Lao run restaurants where they have rebranded as Thai food since both cuisines do have similarities in cooking styles.

The Countries, Cultures and Food Origins

Popular Cuisines in Thailand versus Laos

Pretty much, hands down, between Thai food and Lao food, this is the most well known dish on this list.

It is a rice noodle stir-fry dish that has a blend of sweet and salty. It’s a combination of Tamarind sauce with fish sauce and a mild dose of coconut milk. It normally is topped with a squeeze of lime and crushed peanuts along with a protein, like chicken and shrimp.

This is a hot and sour soup that is based with shrimp simmered with kaffir lime leaves, lime juice, fish sauce, mushroom, and most importantly lemongrass. Sometimes, you’ll find it made with chicken or pork. There is another version of this soup that includes coconut milk called Tom Yum Nam Khon, which is not as popular as this one. The reason why it’s so popular is because of it’s ying and yang flavors when you slurp it all up.

Here’s what each part of the name means:

So it literally means to boil the shrimp. 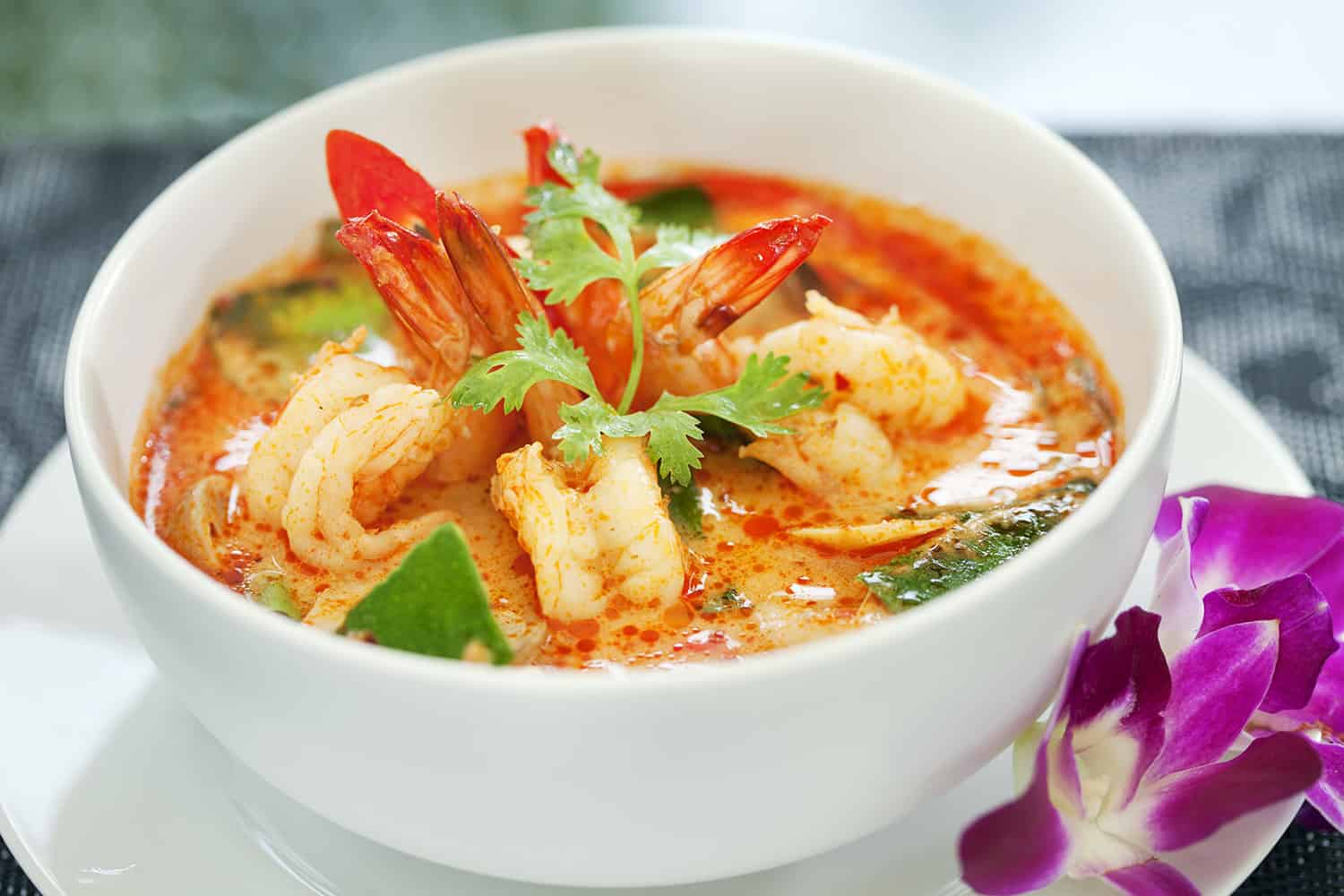 This is a Thai coconut chicken soup that has a rich, creamy and tangy flavor. While it’s lighter than most Thai curry, it is absolutely bursting with lots of varying flavors. It is a savory soup that you typically pair with a side of white rice.

You will see this dish named so many different ways when trying to translate it to American English. This is a hot and sour dish that is made with minced or ground meat with a lot of fresh herbs and vegetables. When made right, you can taste the lemon and the cilantro. It is a very mainstream dish in Laos. At the heart of the dish, paedek, cilantro, basil, crush roasted rice, shallots, mint and most importantly, lime is used and mixed together by hand. Sometimes, the meat is served with raw beef. 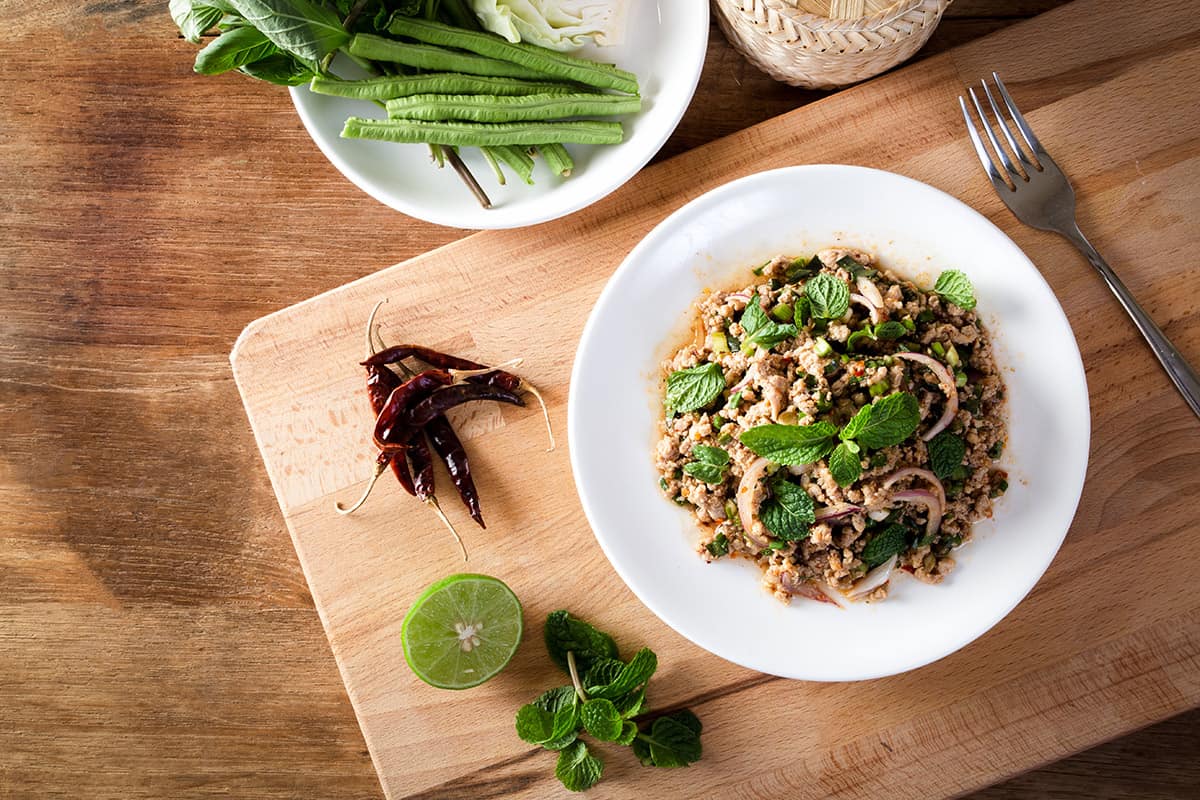 This is basically a papaya that is made from an unripe papaya that is shredded. It is typically comprised of papaya, sour lime, hot serrano pepper, fish sauce, and a little bit of sugar.

This also has a TON of variations in names. Here are what each of the words in how it is described means:

If you put it all together, it literally means “bash a papaya with sour flavor”. And it is delicious as well as divine.

Traditionally, this is a red curry noodle soup that is made up of a red curry base with coconut milk, chilli paste, lemon grass, shallots with a protein that’s simmered with it like pork or chicken.

I just realized as I am typing this post that there are so many crazy names when translating Lao dishes to it’s English translation. This is the most delicious and favorite of all the dishes for my kids and grandkids (who all eat American food as their main dishes now). You have not lived until you eat this.

Here are what each of the words described means:

In general, Thai dishes require a lot of simmering – hours and hours of simmering. Most Lao cuisines, when done right, takes only an hour and is served immediately.

What Are Thai Desserts versus Lao Desserts

Khao Lam is basically a bamboo tube with sweet, sticky rice that is almost like a custard. It has sticky rice with sweet read beans, sugar, and coconut cream that is then stuffed inside of an empty bamboo cane. It is absolutely DIVINE.

This is an absolutely DELICIOUS dessert. The rice is similar to the Thai dish, but the rice wraps around a peeled banana. After that, the rice is then wrapped around a banana leaf and steamed. It’s sweet and savory.

Differences in Regional Dishes IN EACH COUNTRY

Thai cuisine can be segmented into four regional palettes:

Lao cuisine actually is not segmented at all. Most of the dishes in the country are very similar.

Which is healthier: Thai food or Laotian food?

If you had to generalize, Lao food would be healthier because of it’s use of fresh vegetables, whereas popular Thai dishes simmer with coconut milk (sometimes overnight).

Do either cuisines use chopsticks?

In Thailand and in Laos, people use their bare hands to eat most dishes. Chopsticks are brought out on occasion for special dishes that have noodles (like Phad Thai or Kapoon). It’s not as common in any of these countries to eat rice with chopsticks.

Recommendations When Ordering Thai or Lao Food for the First Time

Here IS MY FAVORITE DISH for first timers to a Thai restaurant:

I would try the Thai Basil Fried Rice. I know, but for those who have not been to a Thai restaurant, I would go with a more logical next step before going deep into a super, authentic cuisine. After Thai Basil Fried Rice, I would highly recommend the Phad See Eaw dish, which is a wide noodle cooked with sweet soy sauce and stir fried with Chinese broccoli, mushrooms, and eggs. I prefer that over Phad Thai anyday!

Here IS MY FAVORITE DISH FOR  first timers to a Laotian restaurant:

I would highly recommend the papaya salad as an appetizer along with sticky rice (which normally comes with it). If you can’t do the Paedak (my American born kids don’t love it), I would try the Lao Minced Salad (most commonly seen in menus as Larb or one of the many names I listed above).

Now that we’ve taken a close look and compared Thai food to Laotian food, such as cultures, regional differences, food preparation, flavors and spices, I hope you now have the information you need to make a delicious decision on your next meal!

What do you think you’ll try?

Comment below and let me know if you’ve tried any of these cuisines and what your favorite dishes have been.

Check out my other comparison post between Vietnamese food versus Thai food. 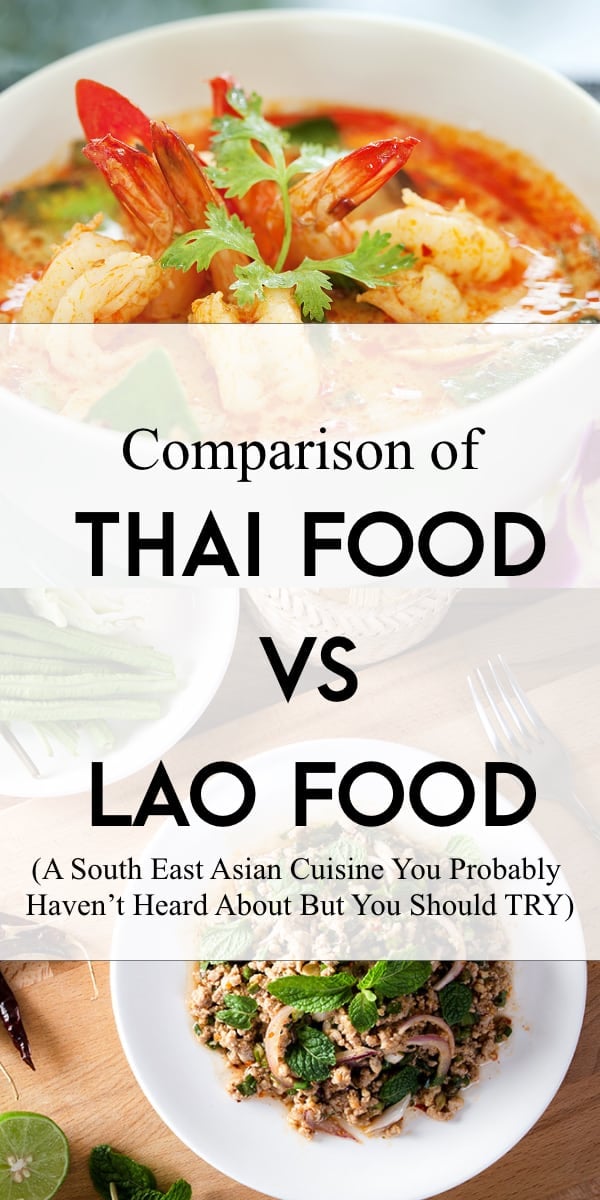